Tokyo - the world's most populous metropolis with 35 million inhabitants - has endless attractions ranging from food to historic temples and unique architecture. To the delight of bibliophiles, Japan's capital also boasts numerous bookstores.

You can't talk about Tokyo without considering the neighbourhoods. Typically centered around one of many large train stations, each district has its own special atmosphere and characteristics. Finding bookshops is exceptionally easy because an entire district is dedicated to used books and publishing. Jimbocho, also spelled Jinbōchō, is Japan's equivalent of a booktown and it is pure heaven for booklovers.

Earlier this year I travelled to Tokyo and did some "bookstore tourism" by visiting several bookshops in Jimbocho and beyond.

Surrounded by universities, Jimbocho is named after a 17th century samurai. The area was destroyed by fire in 1913 and one of the first businesses to rise from the ashes was a bookstore which eventually evolved into the Iwanami Shoten publishing house. 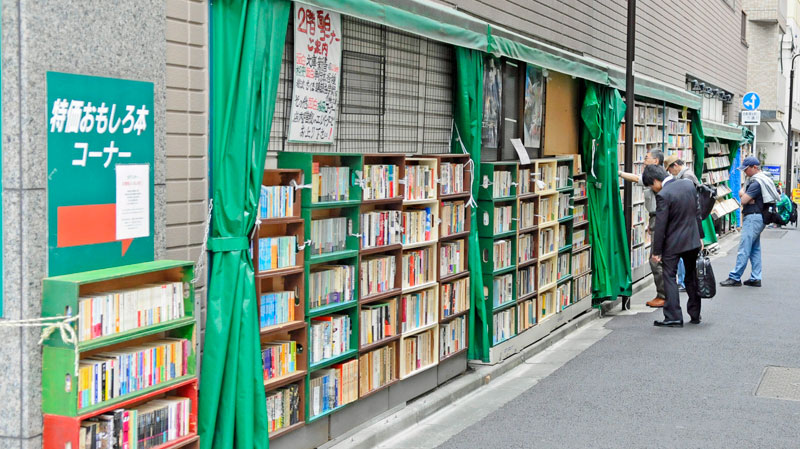 More bookstores and publishers followed along with cafés, bars and restaurants until the area was a hub for readers, collectors and students. Today, there are around 175 bookshops, including about 50 stores devoted to used and rare books. The variety of shops in Jimbocho is stunning - manga specialists, huge stores dedicated to new books, academic and scholarly booksellers, used and rare sellers, and even pop-up bookshops that appear overnight to fill a vacant retail space for a few days.

"Tokyo is too close up to see, sometimes. There are no distances and everything is above your head - dentists, kindergartens, dance studios. Even the roads and walkways are up on murky stilts." — DAVID MITCHELL, Number9dream

Like many areas of Tokyo, space is at premium and bookshops are crammed from floor to ceiling with books. Many shops spill out into the street with tables filled with books and protected shelves attached to outdoor walls tempting passersby to take a break from the hustle of their commute to browse an ever-changing selection. Most bookstores face north to avoid exposure to the hot summer sun and direct sunlight, which gives booklovers an uninterrupted row of shops to browse. Japanese author Haruki Murakami mentions Jimbocho in many of his books, and used to operate a jazz club nearby. The world famous Manga publisher, Shueisha, is located in Jimbocho. This district lives and breathes books and literature. 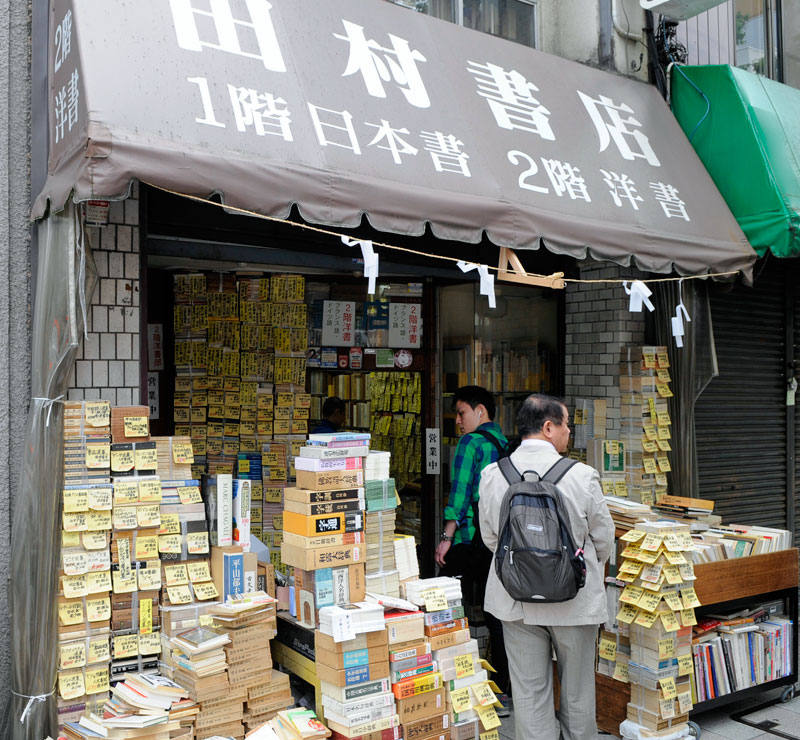 With limited space, books spill onto the street

As most Tokyo residents commute by train and subway, you can see people reading physical books everywhere - although it is often difficult to catch a glimpse of what they are reading since many bookstores wrap books with a proprietary cover. This is done both to preserve the condition of the book, and also to maintain privacy in the close-knit quarters of the crowded city. It takes a while to become accustomed to seeing people reading a book in 'reverse' - as the text of a Japanese edition is delivered to the reader from right to left, and top to bottom. So a Japanese reader starts reading a book at what an English-language reader would consider to be the back of the book.

Haruki Murakami studied drama at Waseda University in Tokyo. His first job was at a record store, a role he gave to Toru Watanabe, narrator of Norwegian Wood. Murakami also ran a coffee shop and jazz club from 1974 to 1981 called the Peter Cat. His main protagonist in another novel, South of the Border, West of the Sun, did much the same thing.

There are 14 booksellers in Japan who sell on the AbeBooks marketplace and I was lucky enough to visit three of them plus a fourth location where a collective of international booksellers offer antiquarian books.

Isseido Booksellers is a third generation bookselling business and was one of the first to rebuild after the great Tokyo earthquake of 1923. The Isseido store is a treasure trove of rare books. I met with the owner, Takehiko Sakai, and the manager of the foreign books department, Tokuei Ueda. The shop itself is beautiful with many amazing books, scrolls, maps and manuscripts. They mentioned that one of their recent major trends was selling ancient materials to buyers from China.

Mr. Ueda displayed a copy of Navigationi et Viaggi by Giovanni Battista Ramusio (1485-1557) - a travel book printed in three volumes from 1563 to 1583 that compiled the travels of Marco Polo, Niccolò Da Conti, Magellan, Alvar Nuñez Cabeza de Vaca and Giosafat Barbaro. Early maps of Brazil, Canada, New England, Africa, Asia and Japan are included. The book, one of the most influential travel publications from the 16th century, is priced around £25,000 and it was breathtaking to see it laid out on the table in front of me.

The business was founded in 1903 by Ukichi Sakai in Nagaoka but it moved to Tokyo where it twice had to recover from disasters - first the great fire and then a major earthquake. The store also survived the World War II bombings, which devastated many areas of the city. Takehiko Sakai, the grandson of the founder, joined the business in 1969 and is still serving customers today. 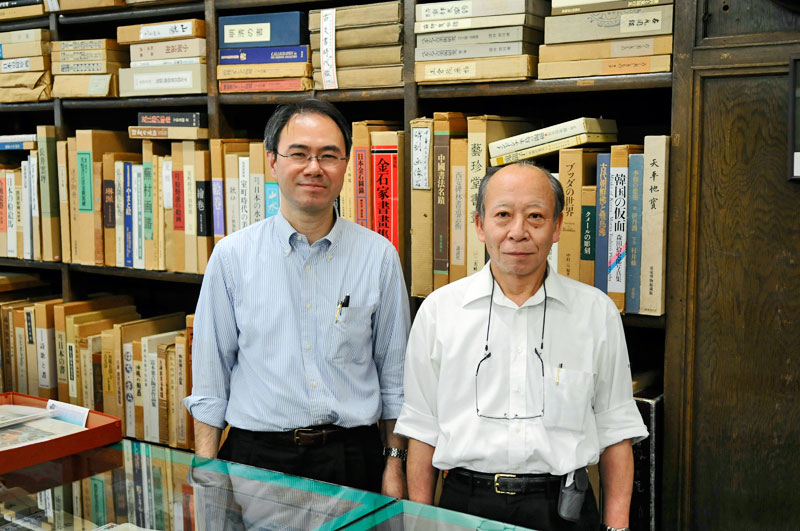 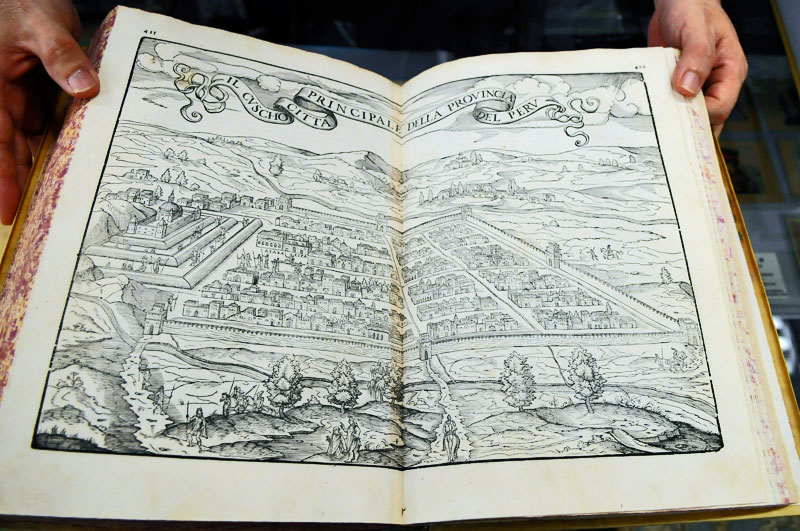 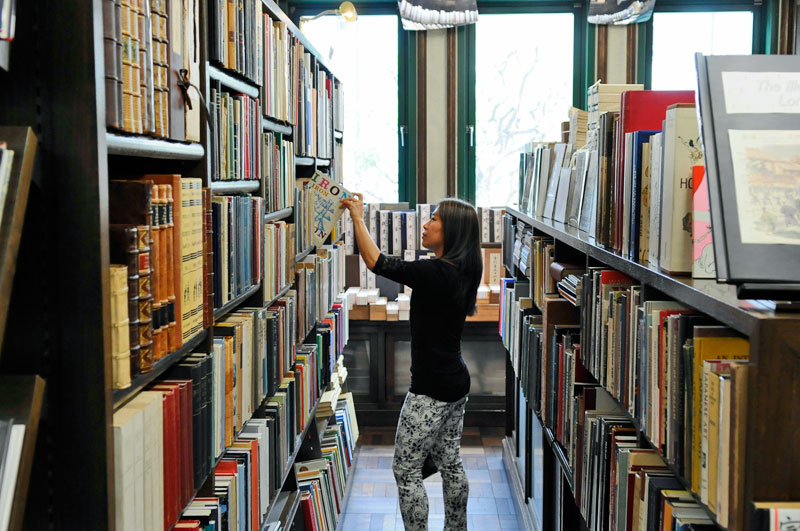 Another third generation bookseller located in the middle of Jimbocho, Ogawa Tosho is one of the most important Japanese specialists in British and American literature, and offers many scholarly editions and rarities. Their inventory includes rare Western works on Japan, philological works, dictionaries and books on grammar.

The shop also offers a huge amount of vintage magazines in many languages. I was shown around by the owner Kazuo Namikawa and also met his team.

An example from their selection that they put on display was a superb leather-bound copy of A Dictionary of the English Language by Samuel Johnson, printed in London in 1755 in two volumes. 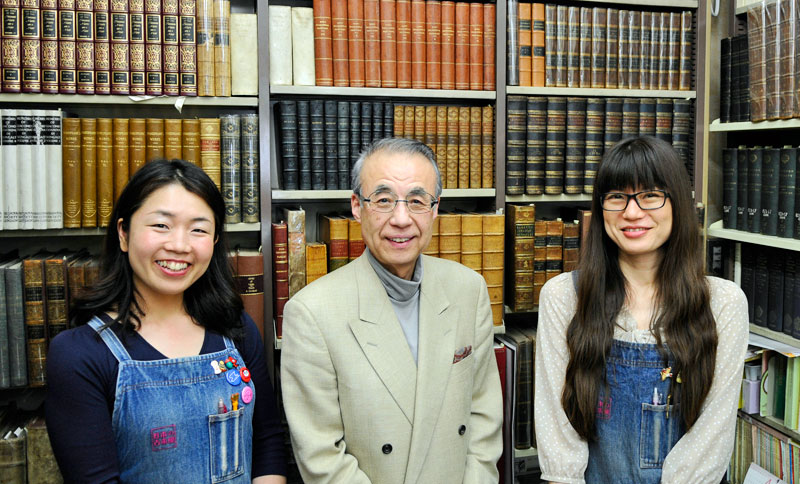 Kazuo Namikawa (center) with his employees

Owned by British ex-pat Nick Ward, this English language bookshop combines two of the great things in life - books and beer. His ground-level shop, which specialises in first editions, out-of-print books, rare and general reading books, contains a bar surrounded with shelves on either side.

This was our last stop of the day, and it was perfectly timed to enjoy a few pints while discussing books, bookselling and life in Japan. This shop is much more than just a place selling books - it is a social gathering point for ex-pats and Japanese alike, and hosts events such as live music, readings, and even the occasional burlesque show. Nick is convinced that the shop is haunted, but that doesn't prevent him from actually living inside the bookshop for five days each week. 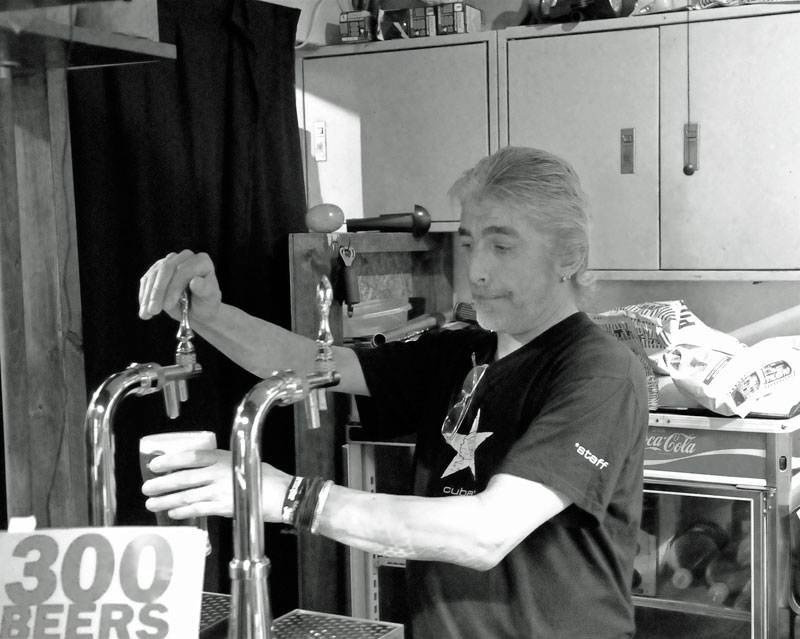 Nick Ward pulls a pint from behind the bar

I also visited the World Antiquarian Book Plaza, which is a cooperative offering rare books from a group of 22 sellers from all over the world. The booksellers include Between the Covers from New Jersey, Bromer Booksellers from Boston, Rulon-Miller Books from Minnesota, Herman H. J. Lynge & Son from Copenhagen and Libreria Pontes from Madrid - all of whom sell on the AbeBooks marketplace.

Many extremely rare and expensive books from all over the world can be seen in this bookshop, with the featured books being regularly updated. Thoughtfully laid out with a museum-like feel, WABP offers an impressive selection of items ranging from ancient clay tablets to intricate pop-up books; and from 15th century illuminated manuscripts to 20th century modern signed first editions. The partner booksellers often refresh their inventory and local curators make great effort to elegantly display the material. A large part of the collection is displayed in the open, available for anyone to view. 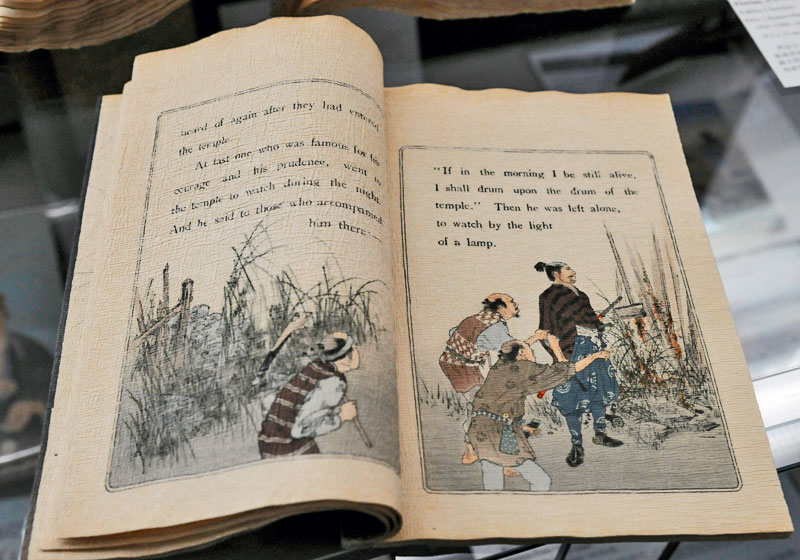 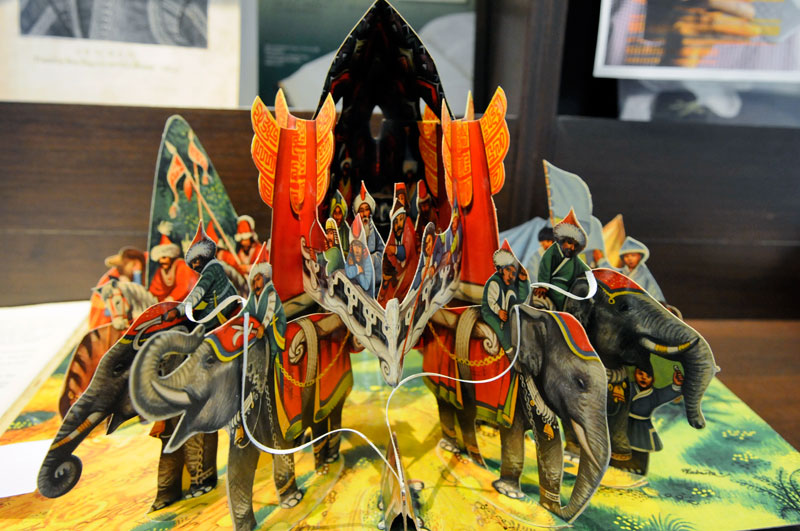 My host Mr. Naoyuki Seki displayed a series of books published in the late 1800s when Tokyo was opening its doors to Western influence. Written in languages other than Japanese (including English, French, German, and Danish), these books were printed to give a first glimpse of Japanese culture and folktales to foreigners wanting to know more. Beautifully illustrated and printed on "Crepe Paper" - a cloth-like type of paper - Mr. Seki was more than happy to bring the collection out from behind the glass case to allow for a closer look, and to feel the beautiful texture.

To Westerners, one of the most famous novels about Japan is Shogun by James Clavell, published in 1975. The book has sold millions of copies worldwide. Set in feudal Japan in 1600, the story shows how one man rises to power seen through the eyes of an English sailor.

The special-themed collection that I saw celebrated paper, including Japanese Washi, and many other types of beautiful and collectable hand-made paper and paper products. I also saw woodblock prints, lithographs, and rare hand-coloured early photographic postcards as well as copperplate-engraved maps showing some of the earliest foreign-made depictions of Japan. 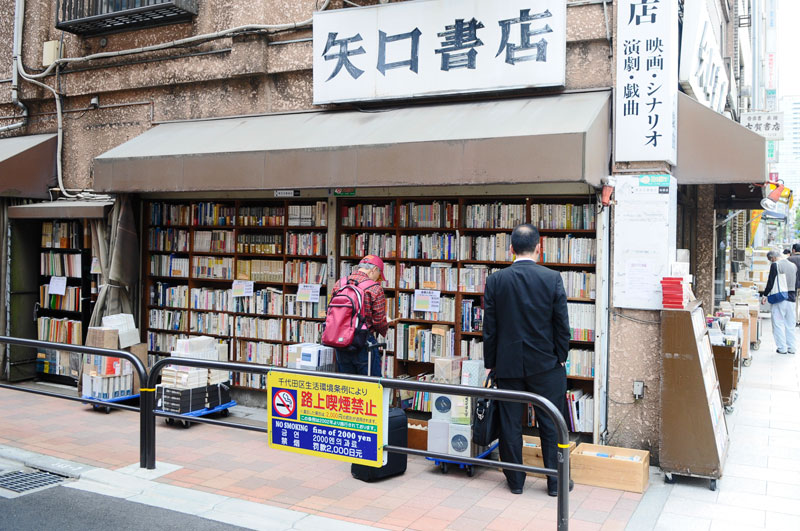 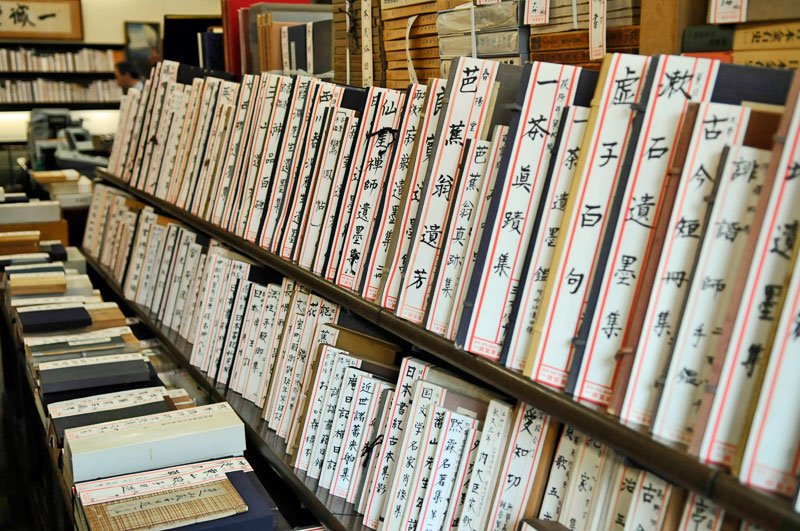 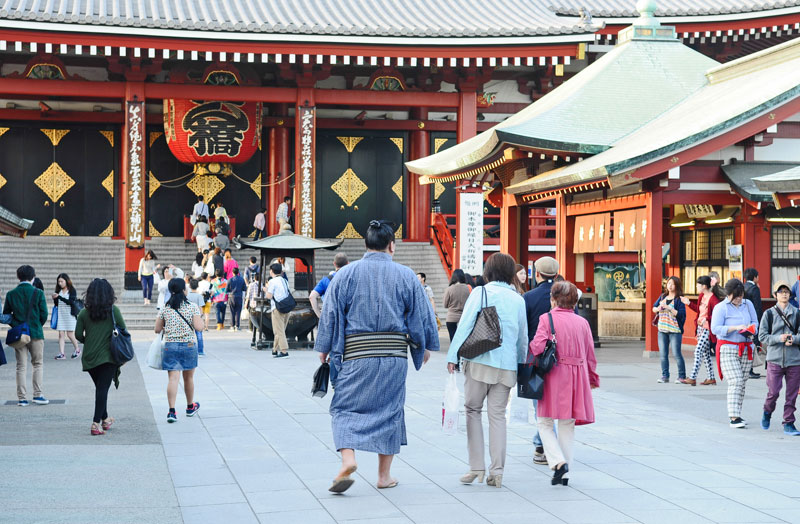 A stroll through Tokyo

Bookstores Off the Beaten Path