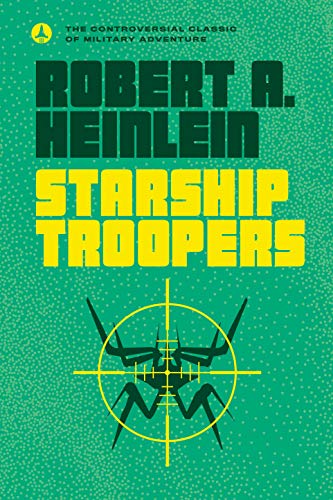 "Starship Troopers" is a classic novel by one of science fiction's greatest writers of all time and is now a Tri-Star movie. In one of Heinlein's most controversial bestsellers, a recruit of the future goes through the toughest boot camp in the universe -- and into battle with the Terran Mobile Infantry against mankind's most frightening enemy.

Written less than 15 years after the end of the second world war, as anti-Communist paranoia was reaching fever-pitch in the United States, this book is very much a product of its time. Originally planned for a juvenile audience, Starship Troopers has become a classic of hard science fiction, albeit a controversial one. Heinlein creates a future society where citizenship must be earned through military service, and although there are a number of exciting scenes of battle, much of the book is taken up with an exploration of the philosophical ramifications of such a society. The book discusses the necessity of warfare to moral development and the importance of beating children in order to make them into good citizens. Heinlein's political theory is quite unpalatable and occasionally irresponsible. However, the book is frequently exciting, and the details of the society are fascinating. This is an entertaining and thought-provoking book, but perhaps not best-suited for use as a political manifesto. The most interesting feature of Starship Troopers is its fascinating glimpse into America's struggle for a post-war identity, told as a heroic tale of interstellar conflict.

"Nothing has come along that can match it."--Science Fiction Weekly "A book that continues to resonate and influence to this day, and one whose popularity and luster hasn't been dimmed despite decades of imitations."--SF Reviews "Heinlein's genius is at its height in this timeless classic that is as meaningful today as when it was written...a fast-paced novel that never gets preachy. This is a definite must-have, must-read book."--SF Site

Book Description Paperback. Condition: New. International edition. Language: English. Brand new Book. In Robert A. Heinlein's controversial Hugo Award-winning bestseller, a recruit of the future goes through the toughest boot camp in the Universe--and into battle against mankind's most alarming enemy. Johnnie Rico never really intended to join up--and definitely not the infantry. But now that he's in the thick of it, trying to get through combat training harder than anything he could have imagined, he knows everyone in his unit is one bad move away from buying the farm in the interstellar war the Terran Federation is waging against the Arachnids. Because everyone in the Mobile Infantry fights. And if the training doesn't kill you, the Bugs are more than ready to finish the job. "A classic.If you want a great military adventure, this one is for you."--All SciFi International Edition. Seller Inventory # FLT9780441783588