A Treasury of American Prints

It could be argued American art came of age in 1939 when Simon and Schuster published a book called A Treasury of American Prints. The book offered 100 etchings and lithographs from America's greatest living artists, and had been edited by Thomas Craven, a highly opinionated art critic.

Housed in a slipcase, the book has simple green covers and a green title page, and after that it's nothing but black and white imagery. Stunning black and white imagery that captures intriguing scenes from American life. It was meant to be a bold statement. America had already become dominant in economics, politics and social affairs, and now their artists demanded respect too. 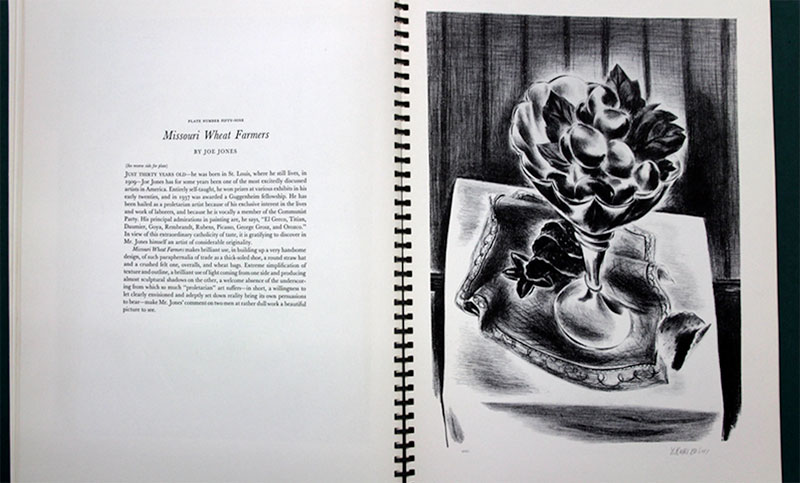 A Treasury of American Prints

What was American Regionalism art?

This movement was popular from the 1920s until the 1950s. The art often focused on rural scenes and small community life even though America was under-going countless technological advances and cities were expanding rapidly. The biggest names were Iowa's Grant Wood, Missouri's Thomas Hart Benton and John Steuart Curry from Kansas. The art was seen as romantic in an age of immense change.

The introduction from Craven is spirited to say the least. He pours scorn on European art and heralds the coming of age of American artists. Craven (1888-1969) was an anti-modernist art critic who championed American "regionalist" art. He was famous for criticism featuring cutting barbs and caustic comments. Benton, Wood and John Steuart Curry particularly benefited from his support.

The book's dimensions are 10.5 X 13 inches. I found a copy of A Treasury of American Prints in a cardboard box beneath a table laden with Grishams and Evanovichs at a charity book sale. The slipcase was an indication of a treasure. I gasped when I opened the book and saw page after page of atmospheric prints. The book was also complete - all 100 prints were present. A Treasury of American Prints is spiral-bound so owners could easily remove particular prints to frame and display.

At the top of the page, you can see Andrew Butler's New England Scene of a train rattling past an ordered farm. There's hardly a blade of grass out of place in this example of a romantic rural scene. 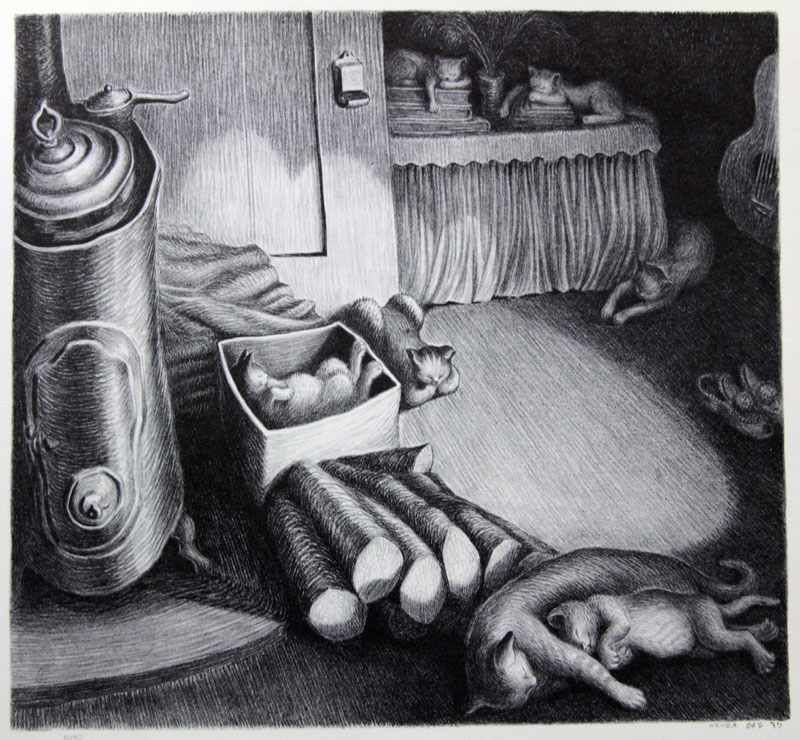 Wanda Gag's Siesta image reveals cat pictures have long been popular. "Siesta shows a family of cats basking in the warmth of an early Autumn fire," wrote Gag. "I am always amused at the natural tendency of cats to fit themselves into and over all sorts of places and spaces." 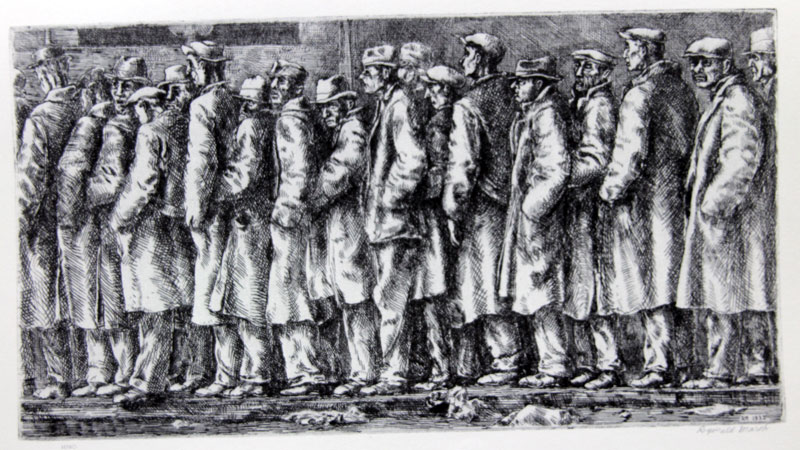 Bread Line was etched by Reginald Marsh in 1932. It requires hardly any descriptive text. Look at the variety of faces and their latent anger. 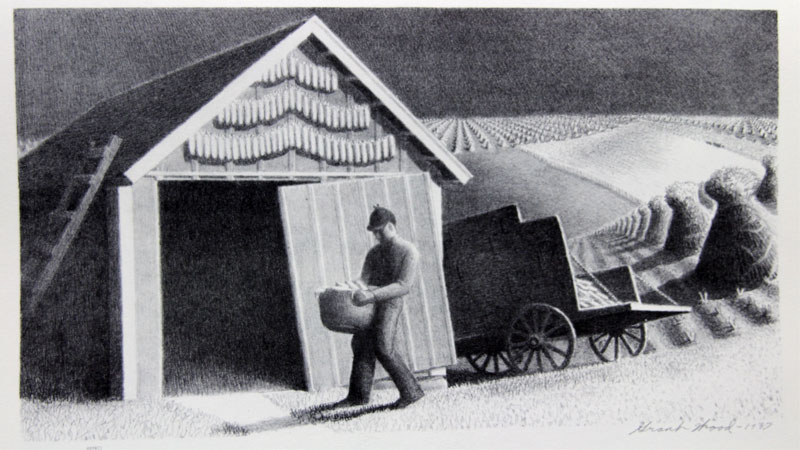 Seedtime and Harvest by Grant Wood

I Got a Gal by Thomas Benton

Today, the fiddler stands out more than the pretty girl and the farmer in Thomas Hart Benton's I Got a Gal on Sourwood Mountain. Gaunt and sad, you have to wonder about the fiddler's life. 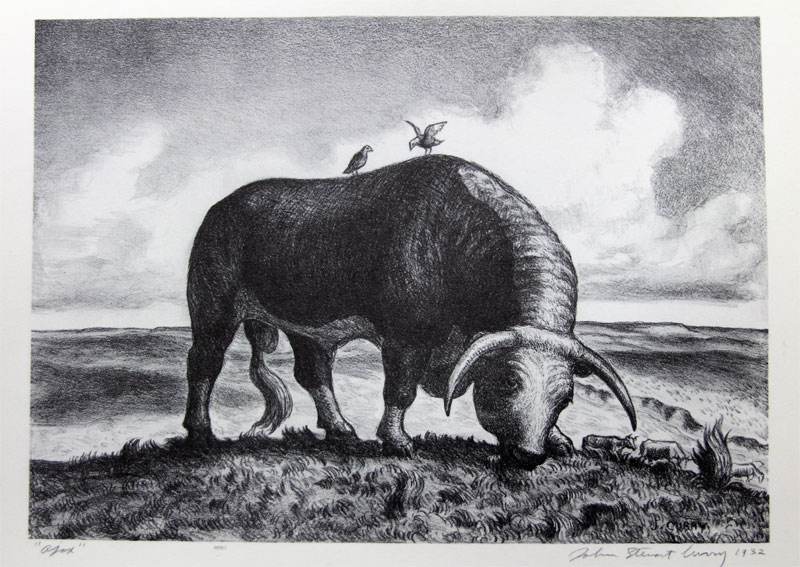 Above, you can see Ajax by John Steuart Curry. The Kansas-born artist was a farm-boy at heart and wasn't impressed by a visit to Paris. This image of an old range bull was inspired by his observations of Hereford bulls roaming the Heart Ranch in Barber County in Kansas. 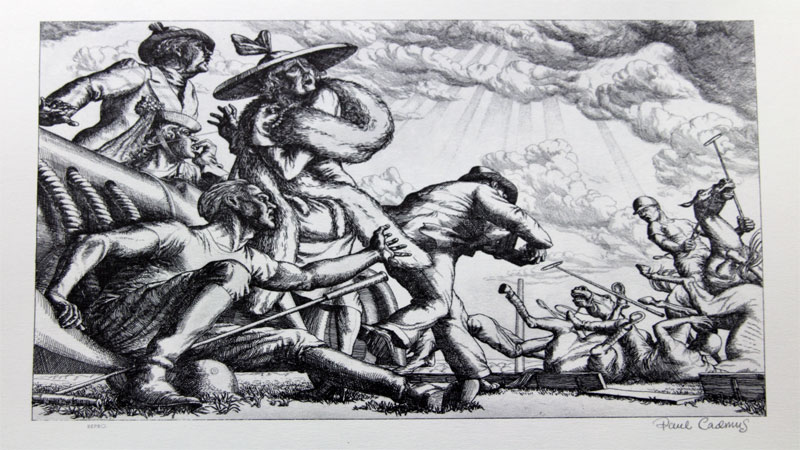 Aspects of Suburban Life - Polo Spill by Paul Cadmus captures violence and stylized glory. Dramatic to the hilt, the original of this print hangs in the American legation building in Ottawa. 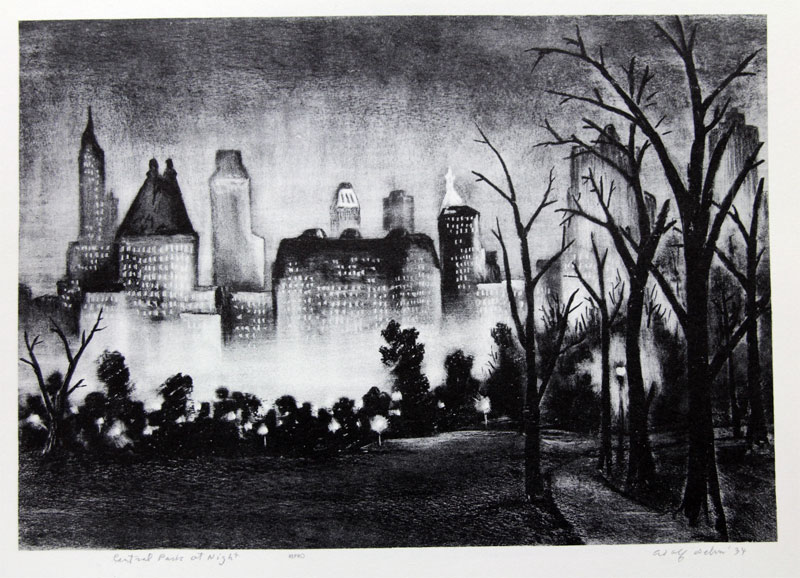 Adolf Dehn's location is the Southeast corner of Central Park, looking towards Fifth Avenue. "The towering splendor of New York's skyline was the thing that excited me," wrote Dehn. 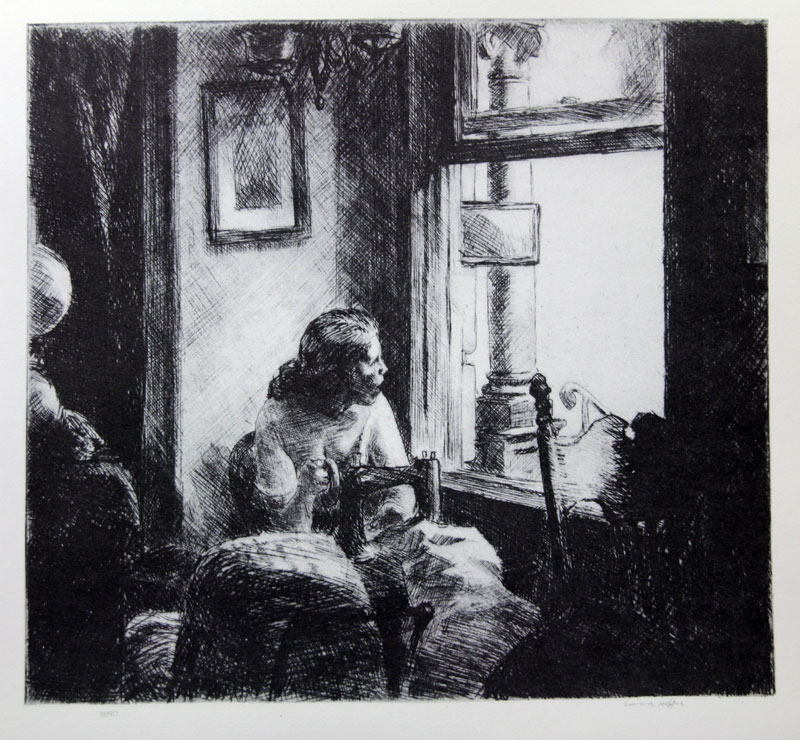 East Side Interior by Edward Hopper

Edward Hopper's East Side Interior takes a drab room and applies realism that draws the viewer to the surfaces and the edges of the each piece of furniture.

"It cannot be denied that an American style in art has definitely emerged, that our most original artists have produced pictures obviously distinct from those in other countries. The distinction is more sharply revealed in our black-and-white art..." - Thomas Craven 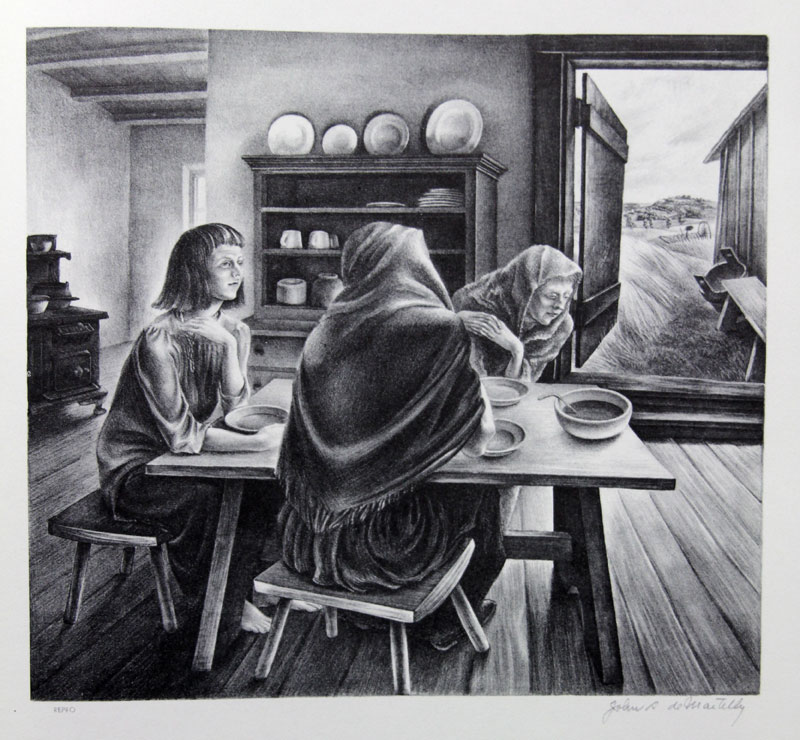 Give us This Day by John S De Martelly

Bright Missouri sunshine coming through the open door gives John S de Martelly's Give us this Day a very clear feel. Born in Kansas City, the artist knew Missouri life through and through. Look at the bareness of the kitchen. 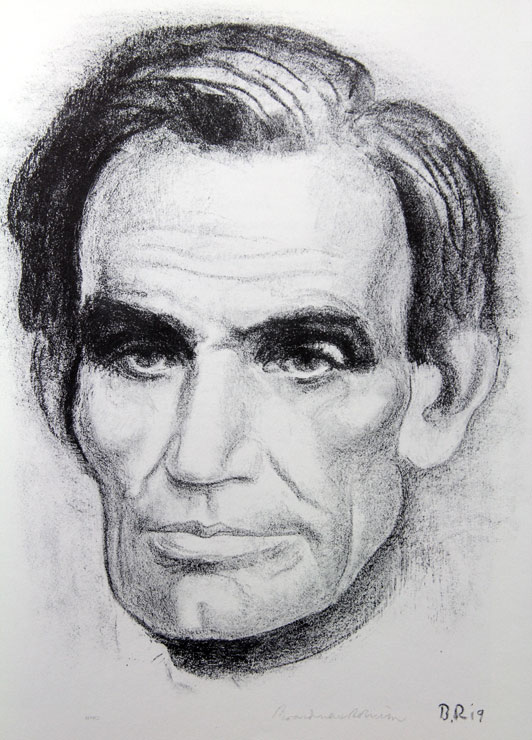 Born in Canada, Robinson studied art in Paris. This is a somber interpretation of Abraham Lincoln, showing the great man as a great thinker, which he was. Robinson became famous for his murals in his later years. 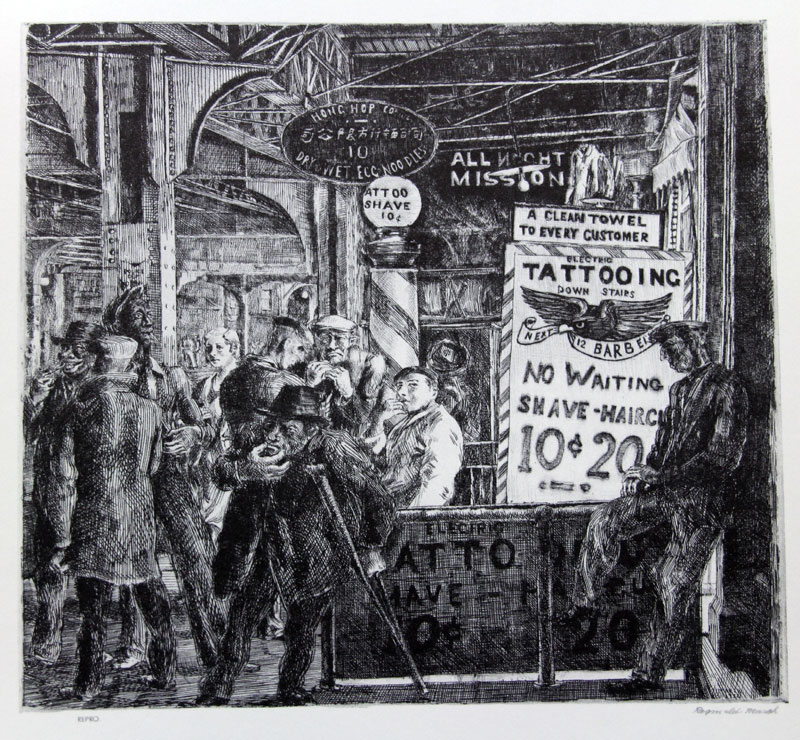 Reginald Marsh's Tattoo-Haircut-Shave shows the lowlife residents of Coney Island as much more interesting than the fancy inhabitants of Park Avenue. Look at the dwarf in the foreground. We're drawn to the vendor signs. 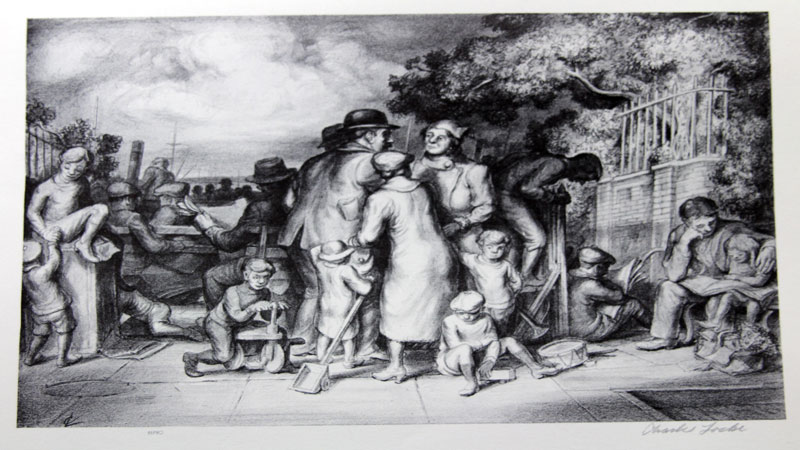 The Terrace by Charles Locke

The Terrace by Charles Locke is hardly realism. More like a sculpture. Montague Street in Brooklyn is packed in this nostalgic view of a community. 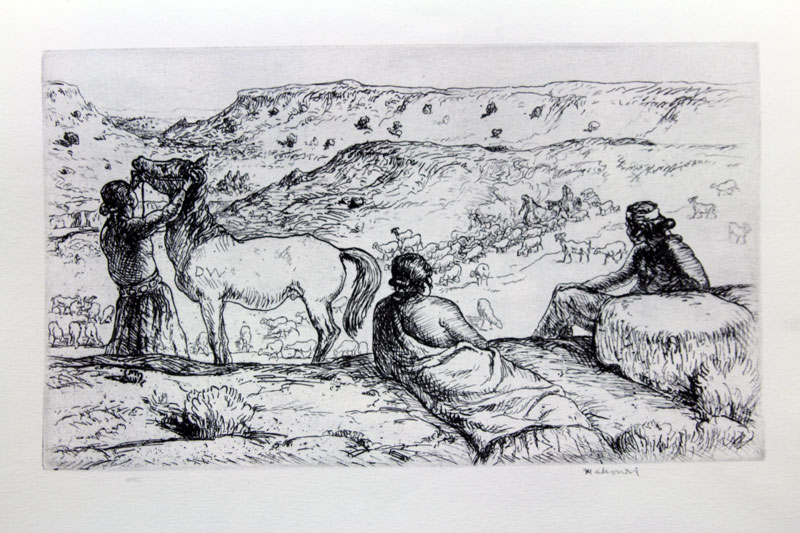 Three Navajos by Mahonri Young is a realistic image of these natives of Arizona. No romanticism here. Young studied and drew the Navajos for quarter of a century.