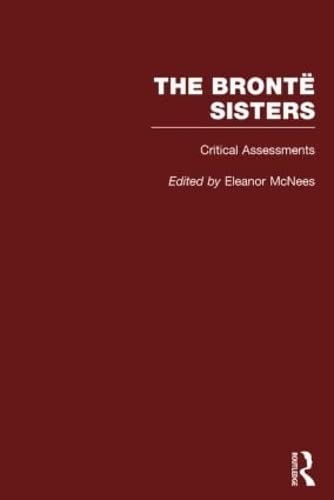 First Published in 1997. Routledge is an imprint of Taylor & Francis, an informa company.

Part of the "Critical Assessments of Writers in English" series, the aim of which is to provide complete collections of previously published, formative critical assessments covering the whole work of individual writers. The titles should be useful to serious readers of literature, researchers and advanced students. Many of the pieces included were originally published in journals or books which are now out of print or very difficult to obtain. Each set has an authoritative introductory survey, as well as a full bibliography and biographical details. This collection attempts to present as wide a view as possible of the Brontes' work, taking into account biographical, aesthetic and feminist concerns and, ultimately, allowing the reader to return to the original texts. The Bronte sisters - Charlotte (1816-55), Emily (1818-48), Anne (1820-49) - have received more critical attention, given their short lives and relatively slender literary production than any other 19th-century British writers save, perhaps, John Keats. Especially in the case of the Brontes, it is often difficult to distinguish the biographical from the critical response.

After the publication of Elizabeth Gaskell's biography of Charlotte in 1857, few essays on the sisters' works could avoid biographical parallels with the novels and poems. The temptation to read all the novels and many of the poems as veiled autobiographies has continued well into the 20th century - it informs many ideologically disparate interpretations. As a group and individually, the Brontes' works resist being swept away by any one critical approach. They defied conventional ideas of the novel genre and have always made it difficult for critics neatly to categorize them. The principal aim of these volumes has been emphasize both the diversity and the difficulty of critical approaches to the works.