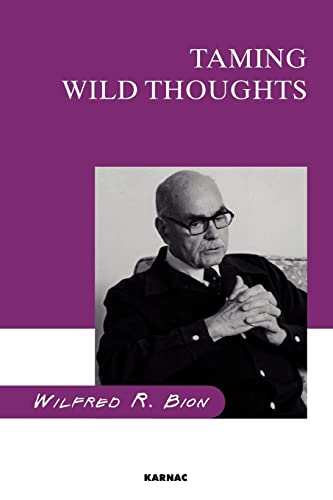 Taming Wild Thoughts brings together previously unpublished works from two different periods of the author's life which are linked, as the author says in her introduction, by the concept of classifying and conceptualizing thought. The first paper, "The Grid", dates from 1963 and is a discussion of great clarity about one of the author's most widely-used conceptual tools; it predates his more discursive paper of the same title (published in Two Papers) by several years. As a teaching paper on this topic, this version of "The Grid" is without parallel, and will doubtless be of great value to all students of his work. The second part of the book consists of transcripts of two tape-recordings made in 1977. They underline his interest in "wild" or "stray" thoughts; and they provide an insight into his extraordinary sensibility at the time of A Memoir of the Future.

Wilfred R. Bion (1897 -1979) was born in India and first came to England at the age of eight to receive his schooling. During the First World War he served in France as a tank commander and was awarded the DSO and the Legion of Honour. After reading history at Queen's College, Oxford, he studied medicine at University College London, before a growing interest in psychoanalysis led him to undergo training analysis with John Rickman and, later, Melanie Klein. During the 1940s his attention was directed to the study of group processes. Abandoning his work in this field in favor of psychoanalytic practice, he subsequently rose to the position of Director of the London Clinic of Psychoanalysis (1956-62) and President of the British Psychoanalytical Society (1962-65). From 1968 he worked in Los Angeles, returning to England two months before his death in 1979. A pioneer in group dynamics, he was associated with the 'Tavistock group', the group of pioneering psychologists that founded the Tavistock Institute in 1946 on the basis of their shared wartime experiences. He later wrote the influential 'Experiences in Groups', an important guide for the group psychotherapy and encounter group movements beginning in the 1960s, and which quickly became a touchstone work for applications of group theory in a wide variety of fields. Bion's training included an analysis with Melanie Klein following World War II. He was a leading member in the Kleinian school while in London, but his theories, which were always based in the phenomena of the analytic encounter, eventually revealed radical departures from both Kleinian and Freudian theory. While Bion is most well known outside of the psychoanalytic community for his work on group dynamics, the psychoanalytic conversation that explores his work is concerned with his theory of thinking and his model of the development of a capacity for thought.