Items related to An Introduction to Literature, Criticism and Theory

An Introduction to Literature, Criticism and Theory 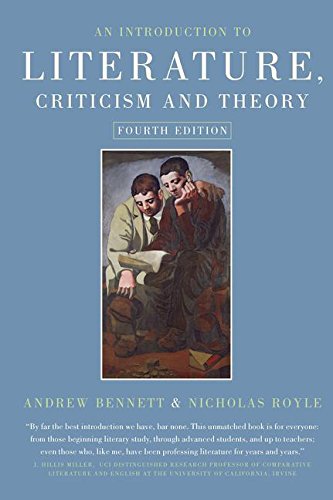 Fresh, original and compelling, An Introduction to Literature, Criticism and Theory is the essential guide to literary studies. Starting at ‘the beginning’ and concluding with ‘the end’, the book covers topics that range from the familiar (character, narrative, the author) to the more unusual (secrets, pleasure, ghosts). Eschewing abstract isms, Bennett and Royle successfully illuminate complex ideas by engaging directly with literary works – so that a reading of Jane Eyre opens up ways of thinking about racial difference, whilst Chaucer, Raymond Chandler and Monty Python are all invoked in a discussion of literary laughter. Each chapter ends with a narrative guide to further reading and the book also includes a glossary and bibliography. The fourth edition has been revised to incorporate two timely new chapters on animals and the environment.

A breath of fresh air in a field that can often seem dry and dauntingly theoretical, this book will open the reader’s eyes to the exhilarating possibilities of both reading and studying literature.

‘By far the best introduction we have, bar none. This unmatched book is for everyone: from those beginning literary study, through advanced students, and up to teachers; even those who, like me, have been professing literature for years and years.’ J. Hillis Miller, Distinguished, Research Professor, University of California, Irvine, USA

‘An exceptional book. It is completely different from anything else currently available, refreshing, extremely well written and original in so many ways . . . It is just the sort of book I would want my students to read...It is quite the best introductory book that I have ever come across.’ Philip Martin, Sheffield Hallam University, UK

‘I am convinced that Bennett and Royle have written a pathbreaking work and I suspect that this book – so full of laughter, suspense, secrets and pleasure – will have an appeal beyond a strictly academic audience.’ Alan Shima, University of Gävle, Sweden

‘All the chapters in the volume are illuminating, informative and original.’ Robert Mills, King’s College London, UK

‘Bennett and Royle offer a different kind of introduction, which directly involves the reader in the problems and pleasures of thinking about literature – its distinctiveness, its strangeness, its power, its inexhaustibility...They succeed brilliantly in encouraging readers who arenew to theory to appreciate its importance, enjoy its revelations, and understand some of its conceptual apparatus without diminishing the centrality of literary writing itself. This is a book which students in every introductory course on criticism and theory would benefit from having.’ Derek Attridge, University of York, UK

‘The most un-boring, unnerving, unpretentious textbook I’ve ever come across.’ Elizabeth Wright, University of Cambridge, UK

‘It is by far the best and most readable of all such introductions that I know of . . . The treatment of the various topics is masterful, evenhanded and informative. I cannot think of a better introduction for undergraduates, to be sure, but for many graduate students too.’ Hayden White, University of California at Santa Cruz, USA

‘I don’t know of any book that could, or does, compete with this one. It is irreplaceable.’ Richard Rand, University of Alabama, USA

‘[Bennett and Royle have] cracked the problem of how to be introductory and sophisticated, accessible but not patronising.’ Peter Buse, English Subject Centre Newsletter

'The best introduction to literary study on the market' Jonathan Culler,

'The most un-boring, unnerving, unpretentious textbook I've ever come across'

'It is by far the bext and most readable of all such introductions that I know of...The treatment of the various topics is masterful, even-handed, and informative. I cannot think of a better introduction for undergraduates, to be sure, but for many graduate students too.'

I don't know of any book that could, or does, compete with this one. It is irreplaceable'

(Bennett and Royle have) cracked the problem of how to be introductory and sophisticated, accessible but not patronising.'

Bennett & Royle approach their subject by way of literary works themselves (a poem by Emily Dickinson, a passage from Shakespeare, a novel by Salman Rushdie), rather than by way of abstract theoretical ideas and isms. In thirty-two short chapters they focus on a range of familiar-looking terms (character, the author, voice, narrative) as well as less obvious ones (laughter, pleasure, ghosts, secrets) in order to show why such literary texts are so compelling. This third edition updates and expands on earlier editions, and includes new chapters on:

An Introduction to Literature, Criticism and Theory avoids what is so frequently tiresome or intimidating about 'theory', offering instead an introduction that is consistently entertaining, thought provoking and surprising.