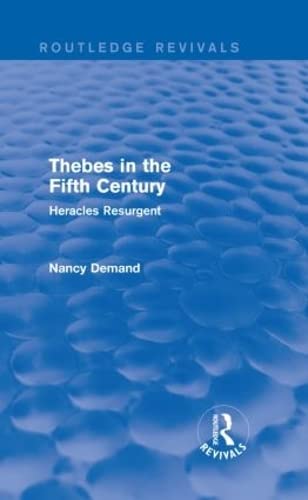 In the fifth century BC Thebes, faced with the challenges presented by defeat and disgrace in the Persian Wars – it had sided with the invaders – succeeded not only in regaining its former prominence, but also in laying the groundwork for its hegemony of Greece in the early part of the fourth century.

In Thebes in the Fifth Century, first published in 1982, Nancy Demand examines the political and military history of this renowned city, as well as a number of other aspects of Theban culture and society: its physical layout, religious cults, poetry and music, arts, crafts and philosophy.

Other topics of special interest include a chapter on Pythagoreanism in Thebes, an appendix on the evidence for the participation of women in Pythagoreanism, and an investigation, extending throughout the book, of the role of women in Theban society.

Nancy Demand is professor emeritus of history at Indiana University.

Thebes in the Fifth Century