Items related to Colorless Tsukuru Tazaki and His Years of Pilgrimage... 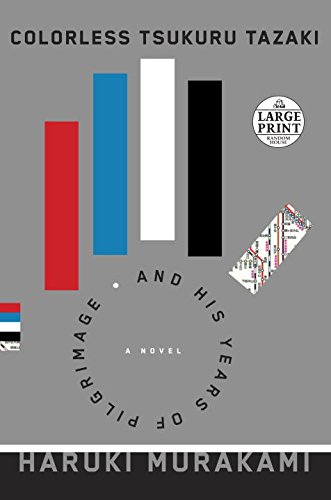 A New York Times #1 Bestseller
A New York Times and Washington Post notable book, and one of the Financial Times, St. Louis Post-Dispatch, Slate, Mother Jones, The Daily Beast, and BookPage's best books of the year

Colorless Tsukuru Tazaki and His Years of Pilgrimage is the long-awaited new novel--a book that sold more than a million copies the first week it went on sale in Japan--from the award-winning, internationally best-selling author Haruki Murakami. Here he gives us the remarkable story of Tsukuru Tazaki, a young man haunted by a great loss; of dreams and nightmares that have unintended consequences for the world around us; and of a journey into the past that is necessary to mend the present. It is a story of love, friendship, and heartbreak for the ages. From the Hardcover edition.

"Murakami is a charming travel companion. Though we know where we're going, and must endure plenty of bumps in the road, the trip is rarely boring, his company is amiable, and we can rest assured that he will take us to strange places we've never been before, except perhaps in dreams. . . . [In Colorless Tsukuru] there is only a single moon in the Tokyo sky. Yet we're undeniably in Murakamiland. Nobody else could have written this novel, or dared to try. Then again, given the remarkable continuity of his fiction, nearly every Murakami novel feels like a new volume of the same meganovel, a vast saga that is now approaching 7,000 pages in length. . . . In Murakamiland, death means merely traveling across a 'threshold' between reality and some other world. It is not necessarily the end. In fact, as we soon learn, Tsukuru's obsession with death is only the beginning. . . . The mesmeric pull of Murakami's fiction lies in this tension between the narrator's perfectly ordinary existence and this shadow world, which might reside in our subconscious or even in an alternate universe, where we are free to enact our darkest, most violent, most perverse fantasies. . . . [He] writes genre fiction--formulaic, conventional, with an emphasis on plot. But it is a genre that he has invented himself, drawing elements from fantasy, noir, horror, sci-fi, and the genre we call 'literary fiction.' . . . The tone [in this new novel] is wistful, mysterious, winsome, disturbing, seductive. It is full of gorgeous, incongruous imagery. . . . Murakami is balletic, evoking metaphysical realms and a fine sense of the grotesque." --Nathaniel Rich, The Atlantic