Items related to Colorless Tsukuru Tazaki and his Years of Pilgrimage

Murakami, Haruki Colorless Tsukuru Tazaki and his Years of Pilgrimage

Colorless Tsukuru Tazaki and his Years of Pilgrimage 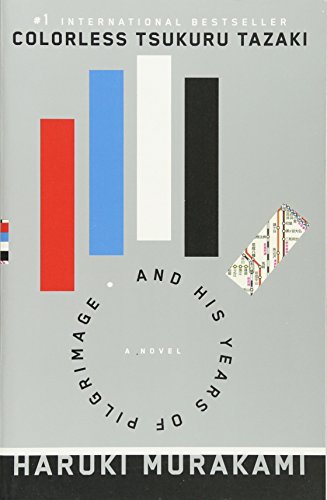 Colorless Tsukuru Tazaki and His Years of Pilgrimage marks a new direction in Murakami's fiction: a return to the lyrical realism not seen since his 1987 novel Norwegian Wood, but set against the social realities of contemporary Japan.
Colorless Tsukuru Tazaki and His Years of Pilgrimage centers on a devastating emotional betrayal and its consequences. Tsukuru Tazaki belongs to a tight-knit group of five friends in high school--three boys and two girls who form a perfect circle they imagine will stay together forever. But when Tsukuru returns home from college in Tokyo, he finds himself inexplicably rebuffed by the group. Something has changed, but nobody, not even his closest friends, will tell him what.
Years later, Tsukuru, now a successful engineer, begins dating an older woman named Sara and confesses to her the shadow this betrayal has cast over his life. Sara urges Tsukuru to try to find his old group and to try to solve the mystery that has haunted him all these years: why did they suddenly turn on him?
On a quest to discover the truth, Tsukuru travels back to meet his old friends--with the exception of Shiro, the group's most volatile and psychologically unstable member, who he learns was strangled to death in an unsolved murder six years ago. As the dark truth about Shiro reveals itself, Tsukuru must confront the simmering emotional undercurrents that the group had suppressed in order to reach their ideal of perfect friendship.
Can love overcome isolation? Is it possible to truly reach another person? Can buried emotions ever really stay buried? And will confronting the past allow Tsukuru to finally open himself up to the future?

"A naturalistic coming-of-age story... sprinkled with strange images and written in a hauntingly mournful key" (Guardian)

"[Murakmi’s] elegant, frugal prose creates a tale of courage and hope as Tsukuru tries to unlock the secrets of his past" (Stylist)

"A rich and even brilliant piece of work... Genuinely resonant and satisfying" (James Walton Spectator)

"This is a book for both the new and experienced reader....[it] reveals another side of Murakami, one not so easy to pin down. Incurably restive, ambiguous and valiantly struggling toward a new level of maturation" (Patti Smith New York Times)

1. Colorless Tsukuru Tazaki And His Years Of Pilgrimage