Items related to The Command of the Ocean: A Naval History of Britain,... 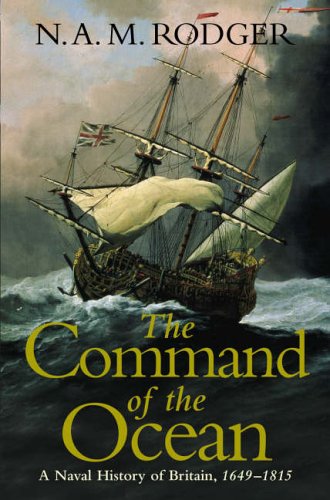 The Command of the Ocean describes with unprecedented authority and scholarship the rise of Britain to naval greatness, and the central place of the Navy and naval activity in the life of the nation and government. Based on the author's own research in half a dozen languages over nearly a decade, and synthesising a vast quantity of secondary material, it describes not just battles and cruises but how the Navy was manned, how it was supplied with timber, hemp and iron, how its men (and sometimes women) were fed, and above all how it was financed and directed. It was during the century and a half covered by this book that the successful organising of these last three - victualling, money and management - took the Navy to the heart of the British state. . It is the great achievement of the book to show how completely integrated and mutually dependent Britain and the Navy then became.

The Command of the Ocean is a landmark in naval and military history; but it also allows us to see the history of Britain as a whole in a new perspective. Anyone interested in British history at this crucial stage in its development will find it both engrossing and enlightening.

NAM Rodger’s The Command of the Ocean, the second part of his naval history trilogy that began with The Safeguard of the Sea, describes Britain’s rise to naval greatness during the period 1649-1815 when she finally gained sovereignty of the seas around the British Isles. It ably demonstrates the importance of naval history to the life of government and the nation; links naval history with political, social, economic, diplomatic, administrative, medical and religious history and charts the naval histories of Britain’s enemies and neighbors including France, Holland, Spain, Denmark and the United States.

Have no doubt, this is a brilliant piece of scholarship, cleverly organized and wonderfully written. Given the promising subject matter of naval warfare to work with it is not surprising that an historian with literary flair can produce a gripping narrative. Perhaps what is surprising is that half the book is devoted to the seemingly mundane background of naval history--how the Navy was managed, financed, directed, and supplied with materials, how the men were fed and so on--rather than the showy foreground, yet it remains a deeply engrossing read throughout. The secret of Rodger’s success is not just down to the cracking narrative and fine scholarship but partly to the way he has organized his material. The main body of the book is arranged into four parallel streams: policy, strategy and naval operations; finance, administration and logistics; social history; and finally the tools of sea-power, ships and weapons. These four themes are broken up into thirty six relatively small chapters each covering a certain time span. Constructing the book in this way has certain practical advantages for the reader. Most importantly, separating the key themes and alternating between them keeps the narrative fresh and interesting while giving the reader the best chance of taking on board the who, what, where, when, how and why of things without losing either the sense of continuity or one’s bearings. Over 100 pages of information are left outside the main body of the text: the front of the book contains several maps, a useful chart listing dates, battles and the names of the ships involved while the back contains an English glossary, a general chronology and appendixes on ships, fleets, rates of pay, Admirals and officials, manpower and naval finance. Rodger’s choice of structure along with his great story-telling abilities means we can assimilate the maximum amount of information with a minimal degree of effort while being thoroughly entertained along the way. On the whole The Command of the Ocean is one those rare specimens that will simultaneously stimulate the specialist and greatly please the general reader. --Larry Brown

'Encyclopaedic in its breadth, detailed in its knowledge, profound in its judgements, elegant in its style...a masterpiece’ -- Kevin Myers, Mail on Sunday

'an extraordinary achievement.... Rodger writes with scrupulous scholarship but deep admiration and love for one of this country’s great institutions' -- Max Hastings, The Daily Mail

'nothing written during the past century, perhaps ever, approaches Rodger’s ambitious and masterly three-volume Naval History of Britain' -- Paul Kennedy, The Sunday Times