Items related to A History of Private Life: From the Fires of Revolution...

Perrot, Michelle; Goldhammer, Arthur; Ariès, Phillippe; Duby, Georges A History of Private Life: From the Fires of Revolution to the Great War v. 4

A History of Private Life: From the Fires of Revolution to the Great War v. 4 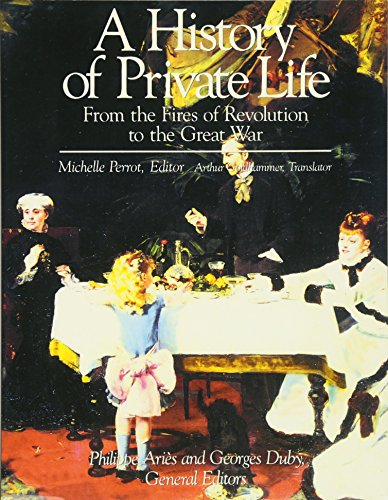 The 19th century was the golden age of private life, a time when the tentative self-consciousness of the Renaissance and earlier eras took recognizable form, and the supreme individual, with a political, scientific and above all existential value, emerged. Volume Four of this award-winning series chronicles this development from the tumult of the French Revolution to the outbreak of World War I - a century and a quarter of rapid, ungovernable change culminating in a conflict that, at a stroke, altered life in the Western world.

The fourth volume of this brilliant series arrives with the poignancy of a letter that through some fluke of the postal system has been delayed 70 or 100 years and is read by descendants of the original addressee... A whole century's cries and murmurs are here, reminding us that their echoes are with us still.--Joseph Coates "Chicago Tribune "

There's something wonderfully audacious about the very concept of 'History of Private Life, ' a five-volume study that seeks to reveal the most intimate details of everyday life over three millennia of Western European history. Here is one scholarly work in which the bathroom and the bordello figure as importantly as the storming of the Bastille or the defeat of Napoleon... A fascinating glimpse into the distant and exotic past.--Jonathan Kirsch "Los Angeles Times "

Together these five compact volumes cover much of the history of the classical world, and do so with both ease and authority.--Washington Post Book World

General readers as well as academic specialists will revel in the wealth of historical detail and insight offered here. Ariès saw three basic forces contributing to the profound social changes of the early modern era: the rise of state power, the spread of literacy, and new forms of religious piety. Together, the essays address each of these realms from several angles, providing glimpses at everything from cookbooks to charivaris, love letters to lettres decachet. The pattern that emerges is the creation of a sphere of private life, thought, and feeling that was unknown in the Middle Ages.--Choice

The new emphasis on the history of everybody has now been consecrated in [this] ambitious five-volume series...masterfully translated by Arthur Goldhammer... Copious illustrative materials--paintings, drawings, caricatures, and photographs, all cannily chosen and wittily captioned to display domestic life... Magnificent.--Roger Shattuck "New York Times Book Review "

1. A History of Private Life, Vol. 4: From the Fires of Revolution to the Great War

2. A History of Private Life, Vol. 4: From the Fires of Revolution to the Great War

3. A History of Private Life, Vol. 4: From the Fires of Revolution to the Great War

4. A History of Private Life: From the Fires of Revolution to the Great War Volume IV (Paperback)

Book Description Paperback. Condition: New. Revised ed. Language: English. Brand new Book. The nineteenth century was the golden age of private life, a time when the tentative self-consciousness of the Renaissance and earlier eras took recognizable form, and the supreme individual, with a political, scientific, and above all existential value, emerged. The present book, fourth in the popular series, chronicles this development from the tumult of the French Revolution to the outbreak of World War I-a century and a quarter of rapid, ungovernable change culminating in a conflict that, at a stroke, altered life in the Western world.Guided by six eminent historians, we move from the Enlightenment of the eighteenth century, which conceived of man as a noble creature of reason, into nineteenth-century Romanticism with its affirmation of distinctively individual creatures in all their mystery and impulsiveness, exalting intuition as a mode of knowledge. More and more, men and women wanted to sleep alone, to be left alone to read and write, to dress as they pleased, to eat or drink anything they liked, to consort with and love whomever they fancied. Growing democracies advanced those wishes to the status of rights, expanding markets stimulated them, and migration encouraged them. That new frontier, the city, simultaneously weakened family and community constraints, spurred personal ambitions, and attenuated traditional beliefs.The authors dramatize the nineteenth century's organized effort to stabilize the boundary between public and private by mooring it to the family, with the father as sovereign. Such chapters as "The Sweet Delights of Home," "The Family Triumphant," and "Private Spaces" describe the new domestic ideal of the private dwelling as a refuge from perils and temptations in the public arena, the father as benevolent despot, the wife as contented practitioner of domestic arts, the children as small versions of adults, equipping themselves to follow in their parents' righteous footsteps. Particularly in England, the middle class was central to the formation of this homely standard, which spread to the working classes through evangelical preaching, utilitarian writings, and economic changes and improvements that resulted in a separation of home and workplace. At the same time, the gentry was transforming castles into country houses, knights into foxhunters, and landowners into gentleman farmers. The domesticating process also expressed itself in hygienic practices (soap, waterclosets, bathtubs), fashions in clothing, and vogues in sports, courtship, and om the time of the French Revolution, when private or special interests were looked upon as shadowy influences likely to foster conspiracy and treason, through the rapid transformations of the nineteenth century, the authors reveal the more radical forms of modernity that arrived with the twentieth century, with its explosions of trade and technology. Besides the external development of goods and conveniences, the expanses of the psyche were also being reorganized, bringing a new openness about sexuality liberated from procreation and marriage. Feminism, a relatively sporadic movement in the nineteenth century, became a more persistent force, while young people and the avant-garde continued to break the rules and push for change as an end in itself. As always, law lagged behind reality: in practice, more and more people rebelled against communal and family discipline. The declaration of war in 1917 put a hold on some of the flowering of individuality, but the unstoppable trend toward personality nurtured by private life was only temporarily curbed. Seller Inventory # BZV9780674400030