Items related to A History of Private Life: From the Fires of Revolution...

Aries, P A History of Private Life: From the Fires of Revolution to the Great War v. 4

A History of Private Life: From the Fires of Revolution to the Great War v. 4 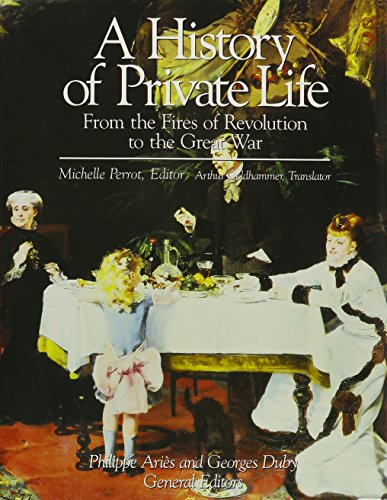 The 19th century was the golden age of private life, a time when supreme individual and existential values emerged. The fourth book in this popular series, written for the cultivated reader, chronicles this development from the tumult of the French Revolution to the outbreak of World War I."

What gives the volume its unity is not so much a rigorous definition of the subject, private life, as a consistency of concentration on a series of very interesting, interrelated themes: living space, and the degree of privacy that it can afford; family relationships, with special references to the nucleargroup that centers around a single married couple; relations between the sexes (both amorous and domestic); attitudes toward the body and nudity; the senseof individuality and self-perception...This volume offers a very full, richly variegated picture of the life, in different places and at different periods, of the Middle Ages. It has lavish and well-chosen illustrations to match the text.

General readers as well as academic specialists will revel in the wealth of historical detail and insight offered here. Aries saw three basic forces contributing to the profound social changes of the early modern era: the rise of state power, the spread of literacy, and new forms of religious piety. Together, the essays address each of these realms from several angles, providing glimpses at everything from cookbooks to "charivaris," love letters to "lettres decachet," The pattern that emerges is the creation of a sphere of private life, thought, and feeling that was unknown in the Middle Ages.

Spanning the period from the 11th century to the Renaissance and focusing on France and Tuscan Italy, this continues the projected five-volume history of private life from the Roman world to the present. 'Private' is here defined as what medieval people considered intimate, familial, domestic...[The book] display[s] an astounding knowledge and use of sources and offer rich detail about everything from affection and sex to domestic arrangements and latrines. The many illustrations strongly support the text. Essential for both research and general collections.--Bennett Hill "Library Journal "

The new emphasis on the history of everybody has now been consecrated in [this] ambitious five-volume series...masterfully translated by Arthur Goldhammer...Copious illustrative materials--paintings, drawings, caricatures, and photographs, all cannily chosen and wittily captioned to display domestic life...Magnificent.--Roger Shattuck "New York Times Book Review "

The fourth volume of this brilliant series arrives with the poignance of a letter that through some fluke of the postal system has been delayed 70 or 100 years and is read by descendants of the original addressee...A whole century's cries and murmurs are here, reminding us that their echoes are with us still.--Joseph Coates "Chicago Tribune "

4. A HISTORY OF PRIVATE LIFE, VOL.