Items related to Kinski Uncut: The Autobiography of Klaus Kinski 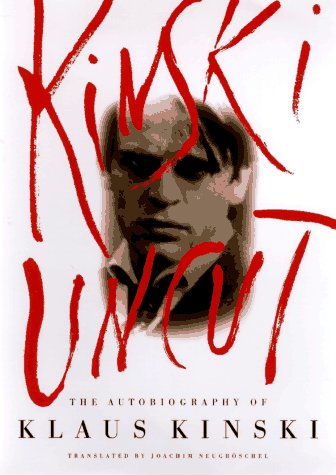 After several aborted attempts, Klaus Kinski's astonishingly raw and notorious memoir has finally made its appearance, unexpurgated, in the English language. From his tortured childhood in the poverty of pre-war Berlin through his conscription into the German army at age 16 and on through to his rise to international stardom as a film actor, this international bestseller tells Kinski's full story and offers a singular, stunning experiment in autobiographical writing. of photos.

This is not a book for the squeamish. Disturbingly violent, sexual and despairing, it is the autobiographical confession of an eternally restless man. It is the life story of Klaus Kinski, the superb screen actor who died in 1991. Kinski, who played in memorable films by David Lean, Sergio Leone, and Billy Wilder, is best known for his roles in Werner Herzog's Aguirre: The Wrath of God and Nosferatu the Vampyre. With graphic detail, Kinski narrates his excessive sexual exploits and fanatical adoration of his son. This book unravels the pitch-dark inner life of an actor who specialized in playing insane people, a man who well understood the psychology of the characters he portrayed.

A memoir by the late German actor exposes a tortured childhood spent stealing food in pre-war Berlin, his conscription into the German army, his recognition as an international film star, and his controversial personal life.