Items related to Study of History 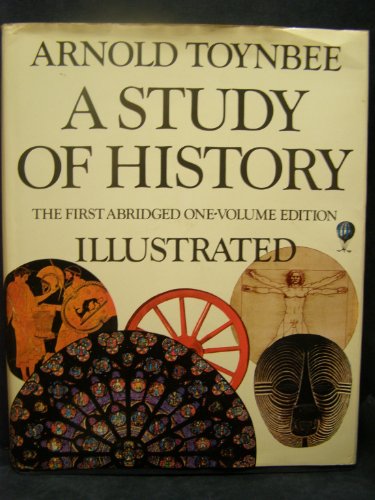 Edition Oxford University Press in association with Thames and Hudson, reprint 1976. ISBN: 0-19-215254-8. This is a new revised and abridged and limited edition by the author and Jane Caplan, with 507 illustrations (90 in colour), 23 maps and charts. 576 pages, large size: 24.5 x 29.5 x 3.75 cm. The book appears to be well preserved: the dust cover remains intact; black cloth hard cover with bright gilt lettering on spine; text all clean, neat and tight. Prompt dispatch from UK.

It is safe to say that there can be few people for whom the reading of Mr Toynbee's work will not be a deeply significant event. It would have struck the imagination of any age by its originality, its range, its learning and its power ... here the reader is offered not some clever and arresting adaptation of the latest novelty in psychology or biology to politics but a large, measured, tranquil and philosophical examination of history by a writer who adds to the rare intellectual equipment needed for so Herculean a task the advantage of experience of public life and contact with foreign scholars and politicians ... nobody can doubt its immense importance to an age that is in disorder because men's habits of mind keep them in a small world while their economic life puts them in a large. (The Guardian, Books of the Day from June 26, 1934, in on 30/10/99)

`By far the most audacious and imaginative view of man's time on earth yet undertaken by any historian...Reading it is a major intellectual adventure.' _Time Magazine_

`Anyone interested in the meaning of history, the life and death of civilizations, and the part now being played by our own culture in the whole story of mankind will surely find something in these magnificently fertile studies by one of the very greatest intellects of our day.' _The New Yorker_

'McNeill's book will be read, and enjoyed, for its own sake. I hope it will revive interest in Toynbee.' The Advertiser, Australia

The late Arnold Toynbee was Director of Studies at the Royal Institute of International Affairs and Research Professor of International History at the University of London and author of numerous other books, including Mankind and Mother Earth: A Narrative History of the World.The late D.C. Somervell was a teacher at Tonbridge School in England.

1. A study of history

2. A study of history