Items related to The Gatekeeper: A Memoir

Eagleton, Terry The Gatekeeper: A Memoir

The Gatekeeper: A Memoir 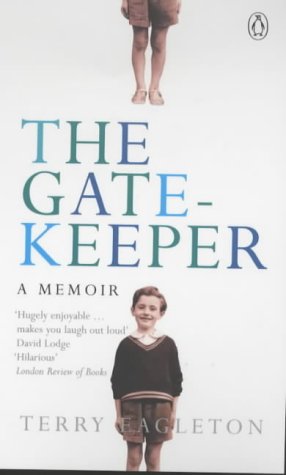 A unique and anarchic blend of autobiography with moral, political and personal reflections. Eagleton was born in Salford in 1943, the grandchild of Irish immigrant labourers; his impoverished childhood seems centred on the life of a convent of enclosed nuns; Eagleton was one of few working-class students at Cambridge in the 1960s and was made the youngest Fellow there since the 18th century; he is now Thomas Warton Professor of English at Oxford. His memoir recounts the most comic and moving moments of his life, connecting these episodes with thoughts about God, evil, suffering and tragedy.

Claiming to come from a family of performers rather than achievers, Terry Eagleton’s outstanding debut memoir, The Gatekeeper, sees him succeed on both scores as he preaches with characteristic, gleeful irreverence from the back pew. Opening with a 10-year-old Eagleton as altar server at a convent chapel in Salford, holding the door for parents leaving their novice daughters forever to God, the narrative closes with delicate resonance on the news of his father’s death while awaiting an interview at Cambridge University. Crammed in between is a glut of typically arch observations on an eclectic variety of subjects by a man once described by Prince Charles as "that dreadful Terry Eagleton". Grandson of Irish-Catholic immigrants to Salford, both his ethnic origin and religious background inform much of his early life, though he comes into his own, inevitably, when he joins the braying classes at Cambridge. The brattish dons who outraged him are named and shamed with delicious frankness, as is the archetypal young fogey with his "outsized cranium and shrivelled heart". The bile is invariably mollified with self-deprecating admissions, such as of his own misguidedly altruistic stint as the Kim Philby of Cambridge Meals on Wheels, as well as eloquent analyses of the figures who helped form his beliefs and passions: men like his supervisor, Dr Greenway, who came to fulfil something of a paternal role for him, Wittgenstein, Brecht, and most intriguingly Wilde, to whom Eagleton has returned constantly in his writings.

A Wildean Marxist, perhaps, but the artist formerly known to the Prince remains also a witty and provocative thinker, unafraid to scale the ivory towers and Ivy League, yet unstinting with enthusiastic praise when due. Always the most earthily intellectual of his radical generation when discussing literature and culture, in writing of Catholics and revolutionaries, convents and colleges, he reaffirms his status as one of Britain’s finest writers, the gatekeeper who became a master literary poacher.--David Vincent

This memoir blends autobiography with moral, political and cultural reflections. Thoughts about god, evil, suffering, death and tragedy are interwoven with comic or moving scenes from Eagleton's life: his bizarre experiences as a young altar server in a convent of enclosed nuns; his precarious career in 1960s Cambridge as one of the few working-class students among a set of public school boys; and his abortive experience of life in a seminary. Eagleton was brought up in Salford in a working-class Catholic family and is now Thomas Warton Professor of English at the University of Oxford. His book discloses the more personal, spiritual side of a well-known cultural thinker; mixing the serious with the hilarious, life with ideas, the personal with the political.

1. The Gatekeeper : A Memoir Eagleton, Terry

2. The Gatekeeper : A Memoir Eagleton, Terry