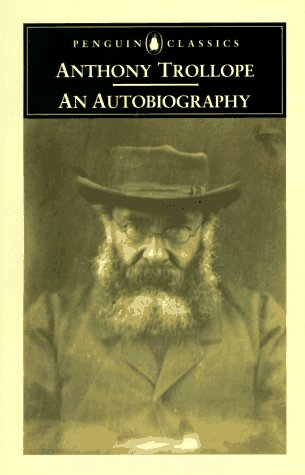 Trollope's "Autobiography" is fascinating not least for the information it gives about his dealings with publishers and periodicals and the sheer quantity of pages he determined to write each day. It records his unhappy youth and his progress to propserity and social recognition, commenting along the way on fellow writers including Dickens and George Eliot, and dispensing practical career guidance for aspiring novelists.

Book Description Paperback. Condition: Good. Connecting readers with great books since 1972. Used books may not include companion materials, some shelf wear, may contain highlighting/notes, may not include cdrom or access codes. Customer service is our top priority!. Seller Inventory # S_314792541

Book Description Paperback. Condition: Used; Acceptable. Dispatched, from the UK, within 48 hours of ordering. The book is perfectly readable and fit for use, although it shows signs of previous ownership. The spine is likely creased and the cover scuffed or slightly torn. Textbooks will typically have an amount of underlining and/or highlighting, as well as notes. If this book is over 5 years old, then please expect the pages to be yellowing or to have age spots. Aged book. Tanned pages and age spots, however, this will not interfere with reading. Damaged cover. The cover of is slightly damaged for instance a torn or bent corner. Inscription on the first page, typically just a name but may include a dedication or a brief personal message. Seller Inventory # CHL6688008

Book Description Paperback. Condition: Very Good. Acknowledged as one of the great autobiographies of the 19th century, Trollope's memoirs allow an insight into his strict working habits, as well as his opinions of contemporaries such as Dickens, Collins, Eliot and Thackeray. The book has been read, but is in excellent condition. Pages are intact and not marred by notes or highlighting. The spine remains undamaged. Seller Inventory # GOR002584405

Book Description Paperback. Condition: Very Good. An Autobiography (Penguin Classics) This book is in very good condition and will be shipped within 24 hours of ordering. The cover may have some limited signs of wear but the pages are clean, intact and the spine remains undamaged. This book has clearly been well maintained and looked after thus far. Money back guarantee if you are not satisfied. See all our books here, order more than 1 book and get discounted shipping. Seller Inventory # 7719-9780140434057

Book Description Paperback. Condition: Very Good. Shipped within 24 hours from our UK warehouse. Clean, undamaged book with no damage to pages and minimal wear to the cover. Spine still tight, in very good condition. Remember if you are not happy, you are covered by our 100% money back guarantee. Seller Inventory # 6545-9780140434057

Book Description Condition: Good. A+ Customer service! Satisfaction Guaranteed! Book is in Used-Good condition. Pages and cover are clean and intact. Used items may not include supplementary materials such as CDs or access codes. May show signs of minor shelf wear and contain limited notes and highlighting. Seller Inventory # 0140434054-2-4

Book Description Paperback. Condition: Very Good. WE ARE PROCESSING ORDERS AS NORMAL DURING THIS VIRUS EPIDEMIC, ALL ITEMS ARE SENT BY ROYAL MAIL. DISPATCHED FROM THE UK WITHIN 24 HOURS ( BOOKS ORDERED OVER THE WEEKEND DISPATCHED ON MONDAY) BY ROYAL MAIL. ALL OVERSEAS ORDERS SENT BY AIR MAIL. WE ALSO ACCEPT PAYMENT IN US DOLLARS OR EURO BY BANK TRANSFER. Seller Inventory # mon0000756047