Items related to The Afterlife: And Other Stories

John Updike The Afterlife: And Other Stories

The Afterlife: And Other Stories 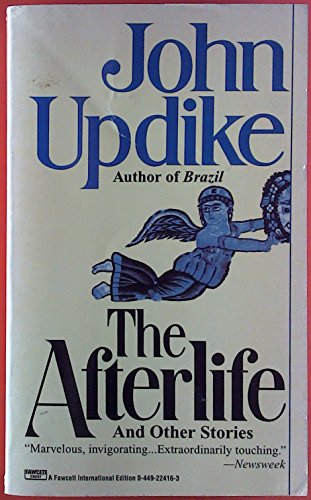 "If one trait can account for John Updike's staying power, it is the man's exquisite grasp of ordinary miracles....With his small mirages, his puddles left by both the heroic and the damned, Updike can turn the simple, misguided efforts of a man into a signature of song."

"MARVELOUSLY MOVING...These tales evoke a certain peace and a definite wonder at what an astonishingly graceful writer Updike is."

"John Updike has rarely written more affectingly, more from the center of his being....This collection is about the passing of generations, and the way that passing leaves people marooned....Reviewing a novel of Vladimir Nabokov in 1964, Mr. Updike said, 'He writes prose the only way it should be written--that is, ecstatically.' That ecstasy is evident on every page of THE AFTERLIFE."

"These are first-rate stories, thoughtful and wise."

AN ALTERNATE SELECTION OF THE BOOK-OF-THE-MONTH CLUB

To Carter Billings, the hero of John Updike's title story, all of England has the glow of an afterlife: "A miraculous lacquer lay upon everything, beading each roadside twig, each reed of thatch in the cottage roofs, each tiny daisy trembling in the grass". All twenty-two of the stories in this collection - John Updike's eleventh, and his first in seven years - in various ways partake of this glow, as life beyond middle age is explored and found to have its own particular wonders, from omniscient golf caddies to prescient sexual rumors, from the deaths of mothers and brothers-in-law to the births of grandchildren. As death approaches, life takes on, for some of these aging heroes, a translucence, a magical fragility; vivid memory and casual misperception lend the mundane an antic texture, and the backward view, lengthening, acquires a certain grandeur. Travel, whether to England or Ireland, Italy or the isles of Greece, heightens perceptions and tensions. As is usual in Mr. Updike's fiction, spouses quarrel, lovers part, children are brave, and houses with their decor have the presence of personalities. His is a world where innocence stubbornly persists, and fresh beginnings almost outnumber losses.

John Updikewas the author of more than sixty books, eight of them collections of poetry. His novels, including"The Centaur, Rabbit Is Rich, "and"Rabbit at Rest, "won the Pulitzer Prize, the National Book Award, the National Book Critics Circle Award, and the William Dean Howells Medal of the American Academy of Arts and Letters. He died in January 2009."

1. The Afterlife and Other Stories

Book Description Borzoi/Alfred A. Knopf, 1995. Paperback. Condition: Good. Connecting readers with great books since 1972. Used books may not include companion materials, some shelf wear, may contain highlighting/notes, may not include cdrom or access codes. Customer service is our top priority!. Seller Inventory # S_281517879

2. The Afterlife and Other Stories

3. The Afterlife and Other Stories

4. The Afterlife: And Other Stories