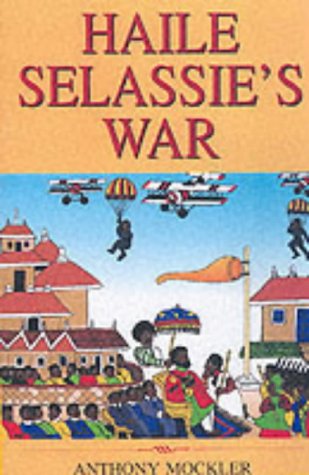 'Half-man, half-snake' was how the Emperor Haile Selassie was described by one of his most ferocious rivals, the eunuch Balcha, who had commanded the artillery at the battle of Adowa where the first Italian invasion of Ethiopia was bloodily repulsed. Forty years later the old Galla warrior was to die, machine-gun in hand, once again attempting-this time without success-to halt the Italian intruders. Anthony Mocker's immensely readable epic history is divided into three parts. First the scene is set in Ethiopia, still feudal, and in Italy, newly fascist. The second part describes in compelling detail the Italian invasion and the battles in the north: it ends with the invaders in undisputed control of their new Roman Empire and with Haile Selassie living in apparently hopeless exile near Bath. The final section recounts how, following Italy's entry into World War II, British Somaliland was invaded and conquered and fears of a British debacle spread all over East Africa. But then the tide of battle turned. As Mussolini's dreams crumbled into dust and his armies into defeat, the ex-Emperor, supported by the bold but amateurish troops of Orde Wingate's Gideon Force, fought his way step by step back into full control of his Empire, despite all the attempts to stop him by Italians, Ethiopians, and even by his allies the British. First published in 1984, this new edition of Anthony Mockler's acclaimed history contains a new foreword by the author. Praised as 'a memorable book' by John Keegan in the Sunday Times, Haile Selassie's War remains an epic tale of colonial ambition, warfare and heroism.

"... a triumph of scholarship, conciseness and cohesion, of order over chaos." Times Literary Supplement "A brilliant record of the almost forgotten Anglo-Italian struggle for Ethiopia and the Horn of Africa." John Keegan

ANTHONY MOCKLER is a former foreign correspondent, specializing in Africa, and the author of Mercenaries, Our Enemies the French, and a biography of Graham Greene.