Items related to Theory and Practice of Counselling and Therapy

Richard Nelson-Jones Theory and Practice of Counselling and Therapy

Theory and Practice of Counselling and Therapy 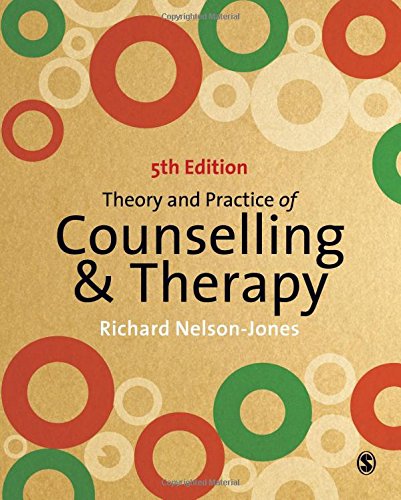 The fifth edition of Richard Nelson-Jones' Theory and Practice of Counselling and Therapy provides an essential introduction to the major theoretical approaches in counselling and psychotherapy today. This comprehensive and accessible book has been substantially revised and updated, and now includes two brand new chapters on solution-focused therapy and narrative therapy by Alasdair Macdonald and Martin Payne.

Following a clearly-defined structure, each chapter describes the origin of the therapeutic approach, a biography of its originator, its theory and practice, discusses case material and further developments, and suggests further reading. Each chapter also contains review and personal questions. Richard Nelson-Jones' authoritative and practical textbook is the ideal companion for students on introductory courses and those embarking on professional training.

'Excellent summary of Rogers' life and work. A thoroughly up-to-date introduction to person-centred therapy' -
Brian Thorne, Emeritus Professor of Counselling, University of East Anglia, and co-founder of the Norwich Centre

"It is hard to imagine a more comprehensive text on counselling and therapy than Richard Nelson-Jones 5th edition of this hugely important book. The author has combined the skills of detailed, up-to-date scholarship with very clear writing. The book is open to a wide readership: from students and researchers at all levels, to practitioners and their clients. I have admired and used Nelson-Jones' work for many years. This latest book is an immense achievement." - Emeritus Professor Philip Burnard, Cardiff University, Wales

"This updated and expanded 5th Edition from Richard Nelson Jones, surely now makes this book a 'classic' in psychotherapy literature. Of particular interest in the new edition is the expansion of chapters on CBT to include both behavioural activation and mindfulness. Presented with the familiar clarity that Richard Nelson Jones is so well known for, this text is a 'must' for both undergraduate and postgraduate psychotherapy modules." - Ian W Ross, University of Chester

Richard Nelson-Jones was born in London in 1936. Having spent five years in California as a Second World War refugee, he returned in the 1960s to obtain a Masters and Ph.D from Stanford University. In 1970, he was appointed a lecturer in the Department of Education at the University of Aston to establish a Diploma in Counselling in Educational Settings, which started enrolling students in 1971. During the 1970s, he was helped by having three Fulbright Professors from the United States, each for a year, who both taught students and improved his skills. During this period he broadened out from a predominantly client-centred orientation to becoming much more cognitive-behavioural. He also wrote numerous articles and the first edition of what is now The Theory and Practice of Counselling and Therapy, which was published in 1982. In addition, he chaired the British Psychological Society's Working Party on Counselling and, in1982, became the first chairperson of the BPS Counselling Psychology Section.

In 1984, he took up a position as a counselling and later counselling psychology trainer at the Royal Melbourne Institute of Technology, where he became an Associate Professor. He continued writing research articles, articles on professional issues and books, which were published in London and Sydney. As when he worked at Aston University, he also counselled clients to keep up his skills. In 1997, he retired from RMIT and moved to Chiang Mai in Thailand. There, as well as doing some counselling and teaching, he has continued as an author of counselling and counselling psychology textbooks. A British and Australian citizen, he now divides his time between Chiang Mai and London and regularly visits Australia.

1. Theory and Practice of Counselling and Therapy

Book Description Paperback. Condition: Very Good. The book has been read, but is in excellent condition. Pages are intact and not marred by notes or highlighting. The spine remains undamaged. Seller Inventory # GOR005659674

2. Theory and Practice of Counselling and Therapy

Book Description SAGE Publications Ltd, 2010. Condition: Good. A+ Customer service! Satisfaction Guaranteed! Book is in Used-Good condition. Pages and cover are clean and intact. Used items may not include supplementary materials such as CDs or access codes. May show signs of minor shelf wear and contain limited notes and highlighting. Seller Inventory # 1849204039-2-4

3. Theory and Practice of Counselling and Therapy

4. THEORY AND PRACTICE OF COUNSELLING AND THERAPY

Book Description SAGE Publications Ltd. soft cover. Condition: Good. International Edition. International Editions may have a different cover or ISBN but generally have the exact same content as the US edition, just at a more affordable price. In some cases, end of chapter questions may vary slightly from the US edition. International Editions are typically printed in greyscale, and likely will not have any color throughout the book. Books in Good condition may have some wear to the cover and binding, highlighting throughout the book, and other minor cosmetic issues but remains very usable. Books ship from multiple locations depending on availability. All orders are shipped with tracking information. We take pride in our customer service. Please contact us if you have any questions regarding this listing. Seller Inventory # 7972