Items related to Wrestling the Dragon: In Search of the Boy Lama Who...

Naher, G; Naher, Gaby Wrestling the Dragon: In Search of the Boy Lama Who Defied China: In search of the Tibetan lama who defied China 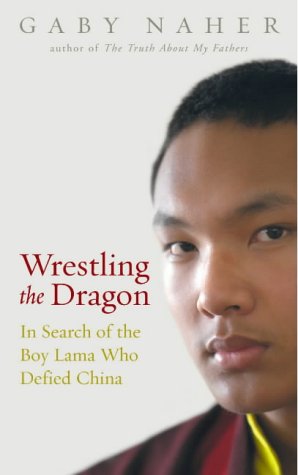 He's master of the PlayStation, he listens to rap music, he writes poetry and, in his eighteen-year-old hands, may hold the future of the Tibetan people. He is Ogyen Trinley Dorje, a Tibetan lama and the seventeenth incarnation of the Karmapa (third in line to the Dalai Lama).

When he was fourteen, Ugyen fled Tibet and began his journey into exile - and the Chinese lost the boy they hoped would one day replace the Dalai Lama in the hearts of six million Tibetans. Today, he lives under house arrest, ostensibly being 'protected' by the Indian Government - which is more likely protecting its relationship with China.

So begins the true story of the 17th Karmapa of Tibet, a story which has all the elements of a cracking tale: magical portents at his birth, a village childhood on the Roof of the World, attempted indoctrination by the Chinese-his short life provides a fascinating insight into the Contemporary Tibetan struggle, while his future as a religious leader of global significance is already being forecast.

To write this story, Gaby Naher intends to travel throughout the region and interview key players of the Tibetan Government in Exile, as well as religious figures in the area.

"'A journey of discovery, told with clarity and precision'" (The Australian)

The extraordinary true story of Ugyen Trinley Dorje, the 17th Karmapa of Tibet, who may one day succeed the Dalai Lama

1. Wrestling the Dragon : In Search of the Boy Lama Who Defied China Naher, Gaby