Items related to The New Adventures of Bernice Summerfield: The Unbound...

The New Adventures of Bernice Summerfield: The Unbound Universe: 3 (Doctor Who) 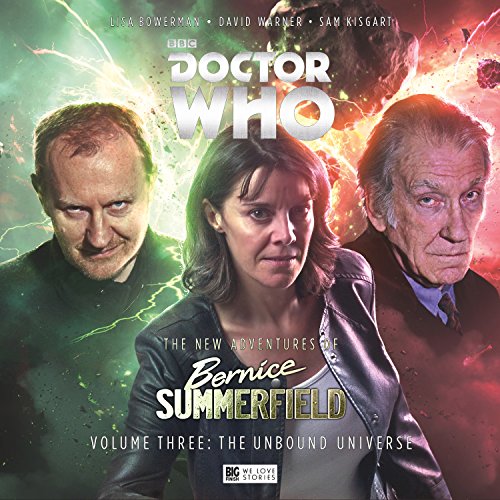 The wrong Doctor, the wrong universe, a whole heap of trouble - Bernice Summerfield is having a really bad day. 3.1 The Library In The Body by James Goss. In a dying reality knowledge is the only thing left of value - and the Kareem have come to destroy it. Can Bernice and the Doctor save the last library? 3.2 Planet X by Guy Adams. Bernice and the Doctor land on a planet so dull no-one ever bothered naming it. Finally something interesting is about to happen here. 3.3 The Very Dark Thing by Una McCormack. Tramatz is an idyllic world - the rivers hum to themselves, unicorns prance through the emerald forests, and, at the very corner of your eye, is a horrible secret. 3.4 The Emporium At The End by Emma Reeves. The Last Song has been sung, and the final day of the universe have begun. Everyone flees to the gateway - to find that The Emporium At The End is having a closing down sale. Professor Bernice Summerfield was a character created as a companion to the Seventh Doctor by writer Paul Cornell for the popular 1990s Doctor Who novelisations. Since then she's found a whole new audio life through plays for Big Finish.Bernice (Benny) is played by Lisa Bowerman, an actor and director from TV and stage, including the last ever Classic Doctor Who story, Survival. British acting hero David Warner reprises his "unbound" Doctor, a character created in a series of "what if..." Doctor Who dramas from Big Finish. The Master being played by Sam Kisgart is an in-joke from the TV series and earlier Unbound stories, being an anagram of the real actor, Mark Gatiss (The League of Gentlemen, Sherlock, Doctor Who, and many, many more). CAST: Lisa Bowerman (Professor Bernice Summerfield), David Warner (The Doctor), Zeb Soanes (The Librarian), Guy Adams (The Sage of Sardner), Tom Webster (Acolyte Farnsworth), Rowena Cooper (Mother Superior), Alex Jordan (Mandeville/Kareem Cheif/Acolyte), Sophie Wu (Millie), Julie Graham (Prime Minister 470), Damian Lynch (Ego), Kerry Gooderson (Megatz), Deirdre Mullins (Fleet Admiral Effenish), George Blagden (Colonel Neave), Richard Earl (Gallario), Aaron Neil (Aramatz), Laura Doddington (Idratz), Lizzie Hopley (Sister Christie), Shvorne Marls (Ampz), Gus Brown (Forz), Scott Handcock (Elevator) and Sam Kisgart as the Master.

1. The New Adventures of Bernice Summerfield: The Unbound Universe (Doctor Who)