Items related to This Immortal 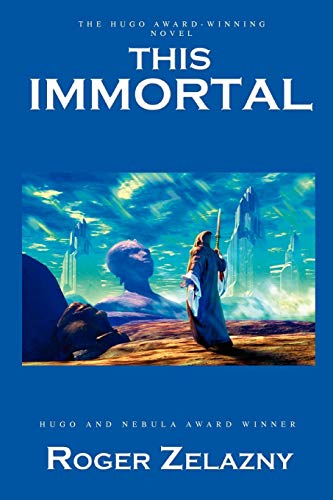 Conrad Nomikos has a long, rich personal history that he'd rather not talk about and a job he would rather not do. Escorting an alien grandee on a tour around a shattered post-nuclear war Earth is not something he relishes, especially when he becomes central to an intrigue determining Earth's future.

The brilliant first novel of one of the most influential and important figures of the New Wave writers of the 1960s.

Roger Zelazny (1937-1995) studied Elizabethan and Jacobean drama at Columbia University before bursting on to the science fiction scene while still in his mid-twenties. Among his many books are Four for Tomorrow, The Dream Master, A Rose for Ecclesiastes and the many titles in the Chronicle of Amber.

Book Description Paperback. Condition: New. Language: English. Brand new Book. "Vivid and elliptical. If you've ever asked yourself what would have happened if Philip Marlowe had been Odysseus. here is a clue to the answer."-New Worlds THE HUGO AWARD-WINNING FIRST NOVEL EVER WRITTEN BY THE BESTSELLING AUTHOR OF THE CHRONICLES OF AMBER! Conrad Nomikos has a long, rich personal history that he'd rather not talk about. And, as Arts Commissioner, he's been given a job he'd rather not do. Escorting an alien grandee on a guided tour of the shattered remains of Earth is not something he relishes-especially when it is apparent that this places him at the center of high-level intrigue that has some bearing on the future of Earth itself! "Roger Zelazny [was] the compleat New Wave author, so daring he could pen nothing without perturbing some creaky icon. so strong a writer, so moving in the sweep of his plots and imagery."-David Brin. Seller Inventory # AAV9781596870741

This Immortal (Paperback or Softback)