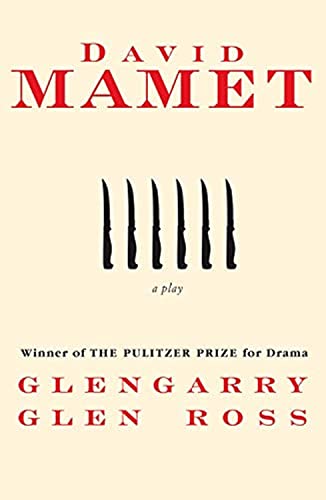 Winner of the 1984 Pulitzer Prize, David Mamet's scalding comedy is about small-time, cutthroat real esate salesmen trying to grind out a living by pushing plots of land on reluctant buyers in a never-ending scramble for their fair share of the American dream. Here is Mamet at his very best, writing with brutal power about the tough life of tough characters who cajole, connive, wheedle, and wheel and deal for a piece of the action -- where closing a sale can mean a brand new cadillac but losing one can mean losing it all. This masterpiece of American drama is now a major motion picture starring Al Pacino, Jack Lemmon, Alan Arkin, Alex Baldwain, Jonathan Pryce, Ed Harris, and Kevin Spacey.

David Mamet (Playwright) plays by David Mamet include: The Penitent, China Doll, The Anarchist, Race, Keep Your Pantheon, School, November, Romance, Boston Marriage, Faustus, Oleanna, Glengarry Glen Ross (1984 Pulitzer Prize and New York Drama Critics Circle Award), American Buffalo, The Old Neighborhood, A Life in the Theatre, Speed-the-Plow, Edmond, Lakeboat, The Water Engine, The Woods, Sexual Perversity in Chicago, Reunion and The Cryptogram (1995 Obie Award). His translations and adaptations include: Faustus and Red River by Pierre Laville; and The Cherry Orchard, Three Sisters and Uncle Vanya by Anton Chekov. His films include: The Postman Always Rings Twice, The Verdict, The Untouchables, House of Games (writer/director), Oleanna (writer/director), Homicide (writer/director), The Spanish Prisoner (writer/ director), Heist (writer/director), Spartan (writer/director) and Redbelt (writer/director). Mr. Mamet is also the author of: Warm and Cold, a book for children with drawings by Donald Sultan, and two other children's books, Passover and The Duck and the Goat; Writing in Restaurants, Some Freaks, and Make-Believe Town, three volumes of essays; The Hero Pony and The China Man, a book of poems; Three Children's Plays, On Directing Film, The Cabin, and the novels The Village, The Old Religion and Wilson. His other books include the acting books, True & False and Three Uses of the Knife, Bambi vs. Godzilla, The Secret Knowledge, The Wicked Son, Theatre, and Three War Stories.