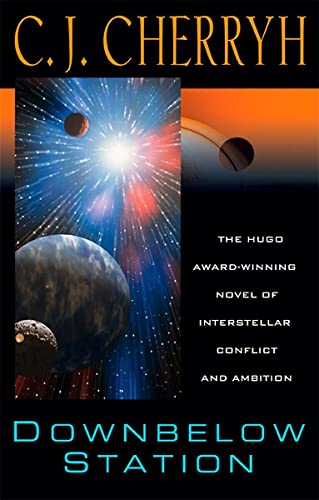 The Beyond started with the Stations orbiting the stars nearest Earth. The Great Circle the interstellar freighters traveled was long, but not unmanageable, and the early Stations were emotionally and politically dependent on Mother Earth. The Earth Company which ran this immense operation reaped incalculable profits and influenced the affairs of nations. Then came Pell, the first station centered around a newly discovered living planet. The discovery of Pell's World forever altered the power balance of the Beyond. Earth was no longer the anchor which kept this vast empire from coming adrift, the one living mote in a sterile universe. But Pell was just the first living planet. Then came Cyteen, and later others, and a new and frighteningly different society grew in the farther reaches of space. The importance of Earth faded and the Company reaped ever smaller profits as the economic focus of space turned outward. But the powerful Earth Fleet was sitll a presence in the Beyond, and Pell Station was to become the last stronghold in a titanic struggle between the vast, dynamic forces of the rebel Union and those who defended Earth's last, desperate grasp for the stars.

Winner of the 1982 Hugo Award for Best Novel "[Downbelow Station] has a marvellous perspective on humanity in the wider universe.... The plot is a complex maneuvering of factions and realignment of interests. There are space battles, and there are economics of space stations.... It's a novel about desperate people, desperate spacestations, desperate aliens, a desperate spacefleet that's out of choices." --Tor.com "A solid, vividly realized background; excellent characterization of humans and aliens; and an ability to keep a story moving... Intelligent space adventure, conceived and executed on a grand scale." --Booklist "Take one highly vulnerable space station. Pack it with realistic characters. And then start a war. You'll end up with 1982's Hugo winner, Downbelow Station, by C.J. Cherryh -- and a hell of a story." --io9 "Cherryh has created her strongest character and her best novel in a story of space exploration, colonization, and war." --Questar "Full of imagination, action, and understandable, sympathetic characters...." --Analog "The well-drawn variety of backgrounds and motivations of the characters is the work's strength." --VOYA "Downbelow Station is a fascinating, complex deep-space-war political novel with a lot of subtle twists." --Fantasiae
About the Author:

C. J. Cherryh planned to write since the age of ten. When she was older, she learned to use a typewriter while triple-majoring in Classics, Latin, and Greek. With more than seventy books to her credit, and the winner of three Hugo Awards, she is one of the most prolific and highly respected authors in the science fiction field. Cherryh was recently named a Damon Knight Memorial Grand Master by the Science Fiction Writers of America. She lives in Washington state. She can be found at cherryh.com.

Downbelow Station : Or the Company Wars

Downbelow Station: Or the Company Wars (Paperback or Softback)