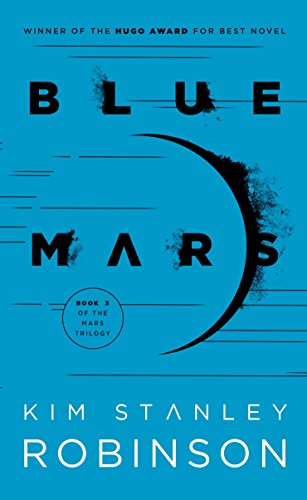 The red planet is red no longer, as Mars

The final volume of a trilogy that began with Red Mars and continued with Green Mars, Blue Mars completes the story of the "First Hundred", a pioneering group of explorers who have overseen a terraforming project that transformed Mars from a lifeless planet into a world habitable by humans. An anti-ageing breakthrough has kept the First Hundred alive for three centuries and in that time, their motives, desires and passions have evolved in ways that parallel the changes on Mars itself. Conceptually complex and daring, the publication of Blue Mars marks the completion of a modern science fiction masterpiece.

Book Description Paperback. Condition: New. Reprint. Language: English. Brand new Book. Winner of the Hugo Award for Best Novel - One of the most enthralling science fiction sagas ever written, Kim Stanley Robinson's epic trilogy concludes with Blue Mars--a triumph of prodigious research and visionary storytelling. "A breakthrough even from [Kim Stanley Robinson's] own consistently high levels of achievement."--The New York Times Book Review The red planet is no more. Now green and verdant, Mars has been dramatically altered from a desolate world into one where humans can flourish. The First Hundred settlers are being pulled into a fierce new struggle between the Reds, a group devoted to preserving Mars in its desert state, and the Green "terraformers." Meanwhile, Earth is in peril. A great flood threatens an already overcrowded and polluted planet. With Mars the last hope for the human race, the inhabitants of the red planet are heading toward a population explosion--or interplanetary war. Seller Inventory # ABZ9780553573350