Items related to The Missing Chapter: A Nero Wolfe Mystery 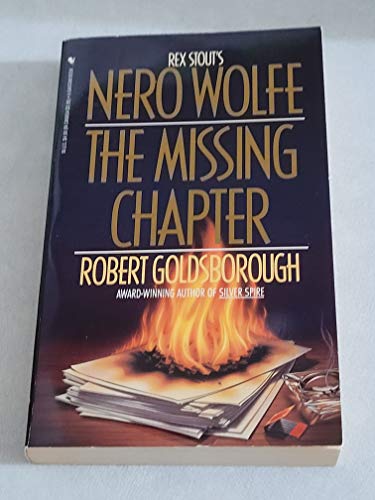 In the latest Nero Wolfe mystery, Nero and Archie investigate the questionable suicide of an unpopular author and unearth a host of suspects including a venomous critic and a former editor whose reputation was smeared by the author. Reprint.

Robert Goldsborough (b. 1937) is an American author best known for continuing Rex Stout’s famous Nero Wolfe series. Born in Chicago, he attended Northwestern University and upon graduation went to work for the Associated Press, beginning a lifelong career in journalism that would include long periods at the Chicago Tribune and Advertising Age.
While at the Tribune, Goldsborough began writing mysteries in the voice of Rex Stout, the creator of iconic sleuths Nero Wolfe and Archie Goodwin. Goldsborough’s first novel starring Wolfe, Murder in E Minor (1986), was met with acclaim from both critics and devoted fans, winning a Nero Award from the Wolfe Pack. Nine more Wolfe mysteries followed, including Death on Deadline (1987) and Fade to Black (1990). Stop the Presses! (2016) is his most recent novel.