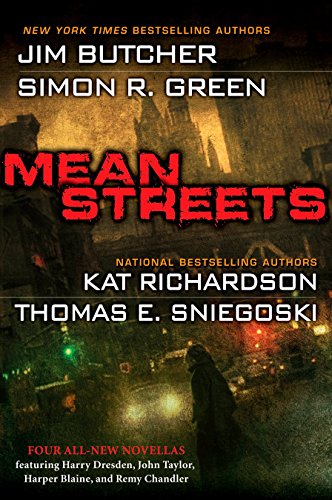 The best paranormal private investigators have been brought together in one volume - and cases don't come any harder than this. Jim Butcher delivers a hard-boiled tale in which Harry Dresden's latest case may be his last. Nightside dweller John Taylor is hired by a woman to find something she lost - her memory. Kat Richardson's Greywalker finds herself in too deep when a simple job goes bad. And detective Remy Chandler has been hired to find out who killed the immortal being we know as Noah.

"Readers will be delighted with this collection of original novellas tied to popular crime/fantasy series...All solid and suspenseful, these stories are sure to please."--Publishers Weekly

"Entertaining excitement...Four great stories you won't want to miss, as they seem to fill in some of the gaps between novels and give you a peek into the character's lives you like to read about."--SFRevu "These four new novellas by top urban noir authors will entertain while showing the seedier, darker side of town and human nature...Imaginative yet humanizing storylines with familiar characters make this collection a treat and a great introduction for readers new to the genre."--Monsters and Critics "Each tale is well written, feeling complete even in the novella format, and complement one another as the writers rose to the occasion of expectations from their fan base. An obvious must for readers of any of the four paranormal sagas, newcomers will appreciate the introductions to these literary legends as they investigate the otherworldly Mean Streets."--Alternative Worlds "This is a good collection for urban fantasy and noir lovers, combining mystery and magic in thrilling storylines."--News and Sentinel

"Four of today's most talented urban fantasy authors combine their magic to deliver an outstanding collection. Walking in these characters' shoes is enlightening, frightening, and not for the faint of heart!"--RT Book Reviews About the Author:

A martial arts enthusiast whose résumé includes a long list of skills rendered obsolete at least two hundred years ago, #1 New York Times bestselling author Jim Butcher turned to writing as a career because anything else probably would have driven him insane. He lives mostly inside his own head so that he can write down the conversation of his imaginary friends, but his head can generally be found in Independence, Missouri. Jim is the author of the Dresden Files, the Codex Alera novels, and the Cinder Spires series, which began with The Aeronaut's Windlass.

Kat Richardson is the national bestselling author of the Greywalker series. She lives in the wilds of western Washington, where she hunts down bits of history to turn into terrifying tales, accompanied by her husband and a rescued pit bull terrier. Simon R. Green is a New York Times bestselling author of the Deathstalker, Nightside, and Secret Histories series, among others. He lives in Bradford-on-Avon in England. Thomas E. Sniegoski is a full-time writer of young adult novels, urban fantasy, and comics. His works include the New York Times bestselling Fallen series, the Remy Chandler novels, the graphic novel The Raven's Child, as well as contributions to famous comics such as Batman, Buffy the Vampire Slayer, and B.P.R.D.

Book Description Penguin Putnam Inc, United States, 2009. Paperback. Condition: New. New. Language: English. Brand new Book. Four bestselling fantasy authors present a collection of novellas about dark nights, cruel cities, and paranormal P.I.s--featuring Harry Dresden, John Taylor, Harper Blaine, and Remy Chandler.#1 New York Times bestselling author Jim Butcher delivers a story in which Harry Dresden--Chicago's only professional wizard--tries to protect a friend from danger and ends up becoming a target himself. John Taylor is the best PI in the secret heart of London known as The Nightside. He can find anything. But locating the lost memory of a desperate woman may be his undoing in a thrilling noir tale from New York Times bestselling author Simon R. Green. National bestselling author Kat Richardson's Greywalker finds herself in too deep when a job in Mexico goes awry, and Harper Blaine is enmeshed in a tangle of dark family secrets and revenge from beyond the grave. An ancient being that lived among humanity for centuries is dead, and fallen angel-turned-Boston detective Remy Chandler has been hired to find out who--or what--murdered him in a whodunit by national bestselling author Thomas E. Sniegoski. Seller Inventory # FLT9780451462497