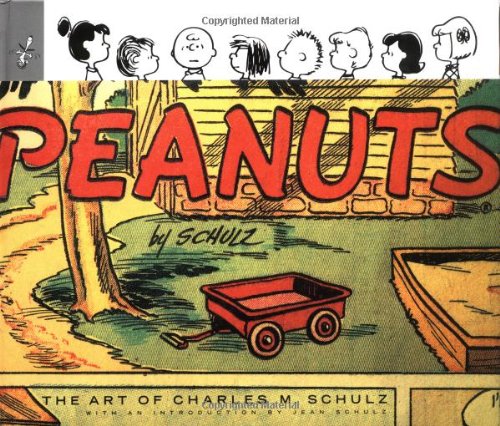 This beautiful album will dazzle fans of Charles M. Schulz and his art, providing an unprecedented look at the work of the most brilliant and beloved cartoonist of the twentieth century. Here is the whole gang Charlie Brown, Lucy, Linus, Snoopy, Peppermint Patty, Schroeder, Pig-Pen, and all the others from the original Peanuts strips.
More than five hundred comic strips are reproduced, as well as such rare or never-before-seen items as a sketchbook from Schulz's army days in the early 1940s; his very first printed strip, Just Keep Laughing; his private scrapbook of pre-Peanuts Li'l Folks strips; developmental sketches for the first versions of Charlie Brown and the other Peanuts characters; a sketchbook from 1963; and many more materials gathered from the Schulz archives in Santa Rosa, California.
The art has been stunningly photographed by Geoff Spear in full color, capturing the subtle textures of paper, ink, and line. The strips which were shot only from the original art or vintage newsprint reveal how, from the 1950s through 2000, Schulz's style and the Peanuts world evolved. The book features an introduction by Jean Schulz and has been designed and edited by renowned graphic artist Chip Kidd, who also provides an informed and appreciative commentary.
This celebration of the genius of the most revered cartoonist of our time is a must for anyone who has ever come under the spell of Peanuts."

Charles M. Schulz was born in 1922 in Minneapolis, the only child of a housewife and a barber. His interest in comics was encouraged by his father, who loved the funny pages. After army duty, Schulz lettered comic pages for Timeless Topix, and sold seventeen cartoons to The Saturday Evening Post from 1948 to 1950 and a feature, Li'l Folks, to the St. Paul Pioneer Press. Peanuts debuted on October 2, 1950, and ran without interruption for the next fifty years. Schulz died on February 12, 2000, and his last strip ran the next day. Peanuts has appeared in 2,600 newspapers in seventy-five countries.