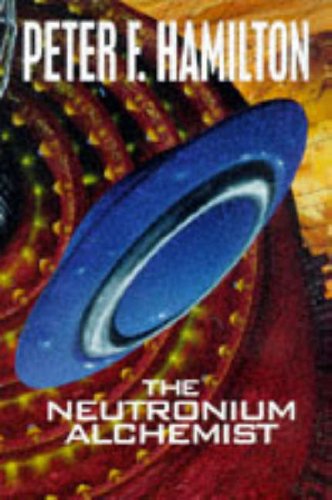 The second volume in the "Night's Dawn" trilogy. An ancient menace has escaped from Lalonde, shattering the Confederation's existence. In such times the last thing the galaxy needs is a new, powerful weapon. Yet Dr Mzu is determined to retrieve the Alchemist, so that she can complete a vendetta.

Peter Hamilton's space-opera saga, which began with The Reality Dysfunction, continues in The Neutronium Alchemist. Now the battle lines are clearly drawn, and more than half a dozen plot lines are charging ahead as humanity's galaxy-spanning culture faces a terrifying revelation: souls of the dead are returning from the beyond to possess the living. The living, though competent and brave in the best sci-fi tradition, must contend with history's greatest generals and leaders, as well as some unexpected champions. Al Capone, it seems, makes an excellent interstellar emperor. How do you fight an enemy whose every soldier is also a hostage and who, if killed, will simply return to possess someone else? The dilemmas are not just technical, but moral, as people face the first real proof of life after death.

This conflict is far broader, though, than a simple apocalyptic battle of good versus evil. Among the possessors are some good souls who fight the risen dead even though it's against their best interest. Conversely, plenty of the living see siding with the dead as an opportunity to further their own interests. Action, wonders, and mystery continue to characterize this high-quality series. --Brooks Peck

Not every fallen angel comes from heaven...