Items related to The Forever War 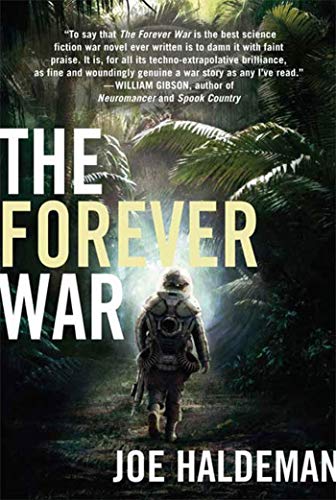 The Earth's leaders have drawn a line in the interstellar sand--despite the fact that the fierce alien enemy they would oppose is inscrutable, unconquerable, and very far away. A reluctant conscript drafted into an elite Military unit, Private William Mandella has been propelled through space and time to fight in the distant thousand-year conflict; to perform his duties and do whatever it takes to survive the ordeal and return home. But "home" may be even more terrifying than battle, because, thanks to the time dilation caused by space travel, Mandella is aging months while the Earth he left behind is aging centuries...

"Today we're going to show you eight silent ways to kill a man." The first line of this 1974 sf war story still grabs hard: The Forever War, winner of both Hugo and Nebula awards, is a fine choice to launch Millennium's "SF Masterworks" series of classic reissues. Future soldier William Mandella's service in the interstellar "Forever War" chillingly echoes Vietnam, where Joe Haldeman was severely wounded and won the Purple Heart. Afterwards, many real-life veterans found themselves distanced and alienated from US society: thanks to starflight's time dislocations, Mandella returns from weeks or months of combat duty to an Earth which after centuries of change is no longer his home. Though armed with increasingly futuristic weaponry--laser fingers, nova bombs, stasis fields--the infantry still suffers the long agonising waits, the sudden flurry and horror of battle, the shock of loss in a futile war without glory or glamour. But there's still room for tenderness, and for a satisfying ending as the cruel equations of relativistic time finally work in Mandella's favour. Incidentally, this is the first full British edition. When The Forever War was serialised, the magazine editor vetoed one section; it was omitted from the 1974 novel and is now restored. Highly recommended. --David Langford

"To say that The Forever War is the best science fiction war novel ever written is to damn it with faint praise. It is, for all its techno-extrapolative brilliance, as fine and woundingly genuine a war story as any I've read." --William Gibson, author of Neuromancer, Spook Country

"There are a handful of moments when an American science fiction novel abruptly and seemingly effortlessly satisfied every possible expectation conveyed not only by the genre's ambitions, but of those of the whole literary landscape with which it was contemporary: Sturgeon's More Than Human, Dick's The Man In The High Castle, LeGuin's Dispossessed, Gibson's Neuromancer. The Forever War is one such book, and like those others still carries with it that air of recognition and possibility." --Jonathan Lethem, author of Gun With Occcasional Music, Fortress of Solitude

"Perhaps the most important war novel written since Vietnam . . . Haldeman, a veteran, is a flat-out visionary . . . and protagonist William Mandella's attempt to survive and remain human in the face of an absurd almost endless war is harrowing hilarious heartbreaking and true . . . like all the best works of literature THE FOREVER WAR takes you apart and then, before you can turn that last page, puts you back together: better, wiser, more human. Simply extraordinary." --Junot Diaz, Pulitzer Prize winning author of The Brief and Wondrous Life of Oscar Wao

"If there was a Fort Knox for Science Fiction writers, we'd have to lock Joe Haldeman up." --Stephen King, author of The Shining, The Dead Zone, The Stand

"The Forever War is not just a great Science Fiction novel, it's a great Vietnam war novel - and a great war novel, without qualification- that is also Science Fiction. A classic to grace either genre." --James Sallis, author of The Long Legged Fly, Drive, Cripple Creek

"FOREVER WAR is brilliant--one of the most influential war novels of our time. That it happens to be set in the future only broadens and enhances its message." --Greg Bear, author of Moving Mars, Eon, The Forge of God

"I first read this twenty years ago and have never forgotten the wonder and fury it kindled at the time. Anyone who talks about the glory of war has obviously never read it. A beautifully detailed and intensely personal account of a conflict which lasts for over a thousand years, as told by one grunt who lives through it all. Only a writer as skillfull and knowledgeable as Haldeman could use war's dark glamour to lure the reader in and then deplou the sam fascination to show just what kind of effect this orchestrated barbarism can have on the human soul." --Peter F. Hamilton, author of Pandora's Star, Judas Unchained, The Dreaming Void

"In a literature of ideas, The Forever War is a titan: a book filled with mind-bending ideas about relatavistic time-distortion and world-shaking ideas about the futility of war. In today's world, where we think declaring war on abstract nouns like TERROR is a winning strategy, we need THE FOREVER WAR." --Cory Doctorow, author of Down and Out in the Magic Kingdom, Little Brother X

"It is to the Vietnam War what Catch-22 was to World War II, the definitive, bleakly comic satire." --Thomas M. Disch, author of Camp Concentration, 334

"The Forever War does what the very best science fiction does. It deals with extremes both societal and teleological; it places a frame around humankind's place in the universe to show us what is outside the frame; and it functions simultaneously at the literal and metaphorical level. Inarguably one of the genre's great novels, it is also among the finest novels ever written about war." --James Sallis, author of The Long Legged Fly, Drive, Cripple Creek

The Forever War (Paperback or Softback)

Book Description Paperback. Condition: New. Reprint. Language: English. Brand new Book. The monumental Hugo and Nebula award winning SF classic-- Featuring a new introduction by John Scalzi The Earth's leaders have drawn a line in the interstellar sand--despite the fact that the fierce alien enemy they would oppose is inscrutable, unconquerable, and very far away. A reluctant conscript drafted into an elite Military unit, Private William Mandella has been propelled through space and time to fight in the distant thousand-year conflict; to perform his duties and do whatever it takes to survive the ordeal and return home. But home may be even more terrifying than battle, because, thanks to the time dilation caused by space travel, Mandella is aging months while the Earth he left behind is aging centuries. Seller Inventory # ABZ9780312536633