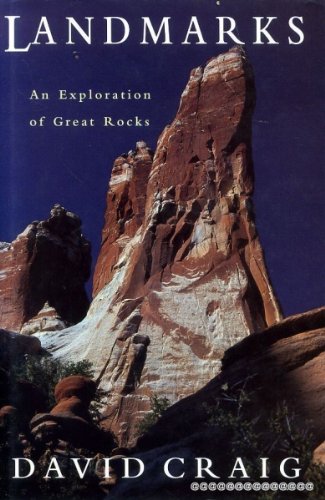 David Craig writes in his preface: 'Wild rocks have occupied a deep space in my mind since my memory began...Rock has always seemed to me the most real stuff on earth. From the ancient understanding ruggedness of those granite crags of my Scottish birthplace to the gorgeous sophistication of Sigiriya, rock came for me to be the chief thing in nature. So I set out to visit as many as I could all over the world, to touch them, climb them and walk around them, and find out what they meant...Some outcrops are famous - these days the image of Uluru (Ayers Rock) is almost as familiar as St Paul's Cathedral. Some have been noticed by only few people from outside their own place, such as the 400 metre North Wall of the Blouberg in the Transvaal, which looks across the Limpopo to Zimbabwe. Some are colossal, like Gibraltar...Some are lowly but pregnant, like the outcrop of Dunadd in Kintyre with its footprints where the kings of Dalriada stood to be crowned. At Ewaninga, I saw an emu footprint pecked out on a slab of red rock...this is the start of writing, only one remove from prints left spontaneously in the ancient mud - the dinosaur footprints I saw west of Tuba City in Arizona, or the footsteps left by Palaelithic poeple in the estuary of the Usk. '

David Craig was born in Aberdeen in 1932. He now lives in Cumbria with the writer Anne Spillard and teaches creative writing at Lancaster University. He is the author of several volumes of poetry and fiction, as well as a book about rock-climbing, Native Stones, which was runner-up for the Boardman Tasker Award. His most recent book, On The Crofters' Trail, about the Highland Clearances, received critical acclaim.

Owing much to Bruce Chatwin, of whom David Craig is a great admirer, this book is a discursive mixture of travel, the cultural influence of large outcrops of rock, and the lives of people round the world who live in their shadow or on their tops.

Landmarks: An Exploration of Great Rocks

Landmarks: An Exploration of Great Rocks