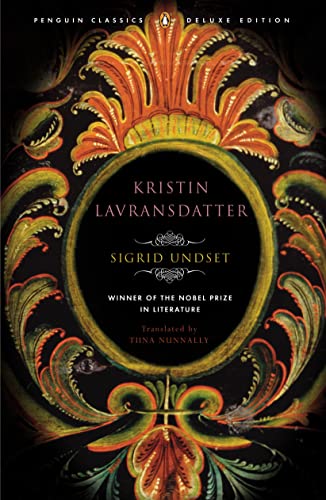 As a young girl, Kristin is deeply devoted to her father, a kind and courageous man. But when as a student in a convent school she meets the charming and impetuous Erlend Nikulaussøn, she defies her parents in pursuit of her own desires. Her saga continues through her marriage to Erlend, their tumultuous life together raising seven sons as Erlend seeks to strengthen his political influence, and finally their estrangement as the world around them tumbles into uncertainty.

With its captivating heroine and emotional potency, Kristin Lavransdatter is the masterwork of Norway’s most beloved author—one of the twentieth century’s most prodigious and engaged literary minds—and, in Nunnally’s exquisite translation, a story that continues to enthrall.

"[Sigrid Undset] should be the next Elena Ferrante . . . whose huge commercial success suggests there is a market for series in translation about fierce, complicated women navigating their culturally conservative European milieu. . . . If HBO is looking for its next miniseries, it should give Kristin Lavransdatter the proper adaptation it deserves. Rereading the trilogy this fall, I kept thinking of Olive Kitteridge, another powerful novel about a prickly mother turned into a worthy HBO miniseries. This trilogy includes illicit sex, affairs, a church fire, an attempted rape, ocean voyages, rebellious virgins cooped up in a convent, predatory priests, an attempted human sacrifice, floods, fights, murders, violent suicide, a gay king, drunken revelry, the Bubonic Plague, deathbed confessions, and sex that makes its heroine ache 'with astonishment--that this was the iniquity that all the songs were about.' " --Ruth Graham, Slate

"[My favorite fictional hero or heroine is] probably Sigrid Undset's strong-willed, sensual, self-destructive and ultimately rock-solid Kristin Lavransdatter. . . . Kristin's eponymous trilogy bears many rereadings. Right away one somehow identifies with this daughter of medieval Norway; soon one compassionates her in her sufferings. . . . For all her faults [she] inspires love in many around her, including this reader. Her faith and loyalty make her quite beautiful to me. Like Murasaki and Dos Passos, Undset tells the story of a whole life." --William T. Vollman, The New York Times Book Review "We consider it the best book our judges have ever selected and it has been better received by our subscribers than any other book." --Book-of-the-Month Club "The finest historical novel our 20th century has yet produced; indeed it dwarfs most of the fiction of any kind that Europe has produced in the last twenty years." --Contemporary Movements in European Literature "As a novel it must be ranked with the greatest the world knows today." --Montreal Star "Sigrid Undset's trilogy embodies more of life, seen understandingly and seriously . . . than any novel since Dostoevsky's Brothers Karamazov. It is also very probably the noblest work of fiction ever to have been inspired by the Catholic art of life." --Commonweal "The first great story founded upon the normal events of a normal woman's existence. It is as great and as rich, as simple and as profound, as such a story should be." --Des Moines Register "No other novelist, past or present, has bodied forth the medieval world with such richness and fullness of indisputable genius. . . . One of the finest minds in European literature." --New York Herald Tribune "A master . . . writing in a prose as vigorous, articulate and naturalistic as the novel it re-creates, Tiina Nunnally brilliantly captures a world both remote and strangely familiar." --Judges' citation, PEN/Book-of-the-Month Club Translation Prize About the Author:

Sigrid Undset (1882–1949) was born in Denmark and raised in Norway. A prolific writer of novels, stories, and essays on subjects ranging from Scandinavian history and literature to the Catholic church and politics, she was awarded the Nobel Prize in Literature in 1928.

Tiina Nunnally is an award-winning translator of Scandinavian fiction and the author of three novels.

Brad Leithauser is the author of several novels, four volumes of poetry, and a collection of essays. He is the Emily Dickinson Lecturer in the Humanities at Mount Holyoke College.

Book Description Paperback. Condition: new. Paperback. In her great historical epic Kristin Lavransdatter, set in fourteenth-century Norway, Nobel laureate Sigrid Undset tells the life story of one passionate and headstrong woman. Painting a richly detailed backdrop, Undset immerses readers in the day-to-day life, social conventions, and political and religious undercurrents of the period. Now in one volume, Tiina Nunnally&#039;s award-winning definitive translation brings this remarkable work to life with clarity and lyrical beauty. As a young girl, Kristin is deeply devoted to her father, a kind and courageous man. But when as a student in a convent school she meets the charming and impetuous Erlend Nikulausson, she defies her parents in pursuit of her own desires. Her saga continues through her marriage to Erlend, their tumultuous life together raising seven sons as Erlend seeks to strengthen his political influence, and finally their estrangement as the world around them tumbles into uncertainty. With its captivating heroine and emotional potency, Kristin Lavransdatter is the masterwork of Norway&#039;s most beloved author&mdash;one of the twentieth century&#039;s most prodigious and engaged literary minds&mdash;and, in Nunnally&#039;s exquisite translation, a story that continues to enthrall.A Penguin Classics Deluxe Edition with French flaps and rough frontIncludes a new introduction by Scandinavian literature expert Brad Leithauser especially commissioned for this edition The Nobel-laureate author tells the life story of a passionate and headstrong woman in the 14th century. She paints a richly detailed backdrop of day-to-day life, social conventions, and political and religious undercurrents. Shipping may be from multiple locations in the US or from the UK, depending on stock availability. Seller Inventory # 9780143039167