Home Samuels Smiles Self help; with illustrations of conduct and perseverance 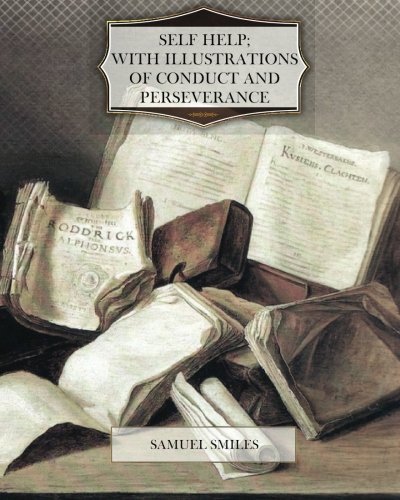 Self help; with illustrations of conduct and perseverance

“The writings of Samuel Smiles are a valuable aid in the education of boys. His style seems to have been constructed entirely for their tastes; his topics are admirably selected, and his mode of communicating excellent lessons of enterprise, truth and self-reliance, might be called insidious and ensnaring if these words did not convey an idea which is only applicable to lessons of an opposing character and tendency taught in the same attractive style. The popularity of this book, ‘Self-Help,’ abroad, has made it a powerful instrument of good, and many an English boy has risen from its perusal, determined that his life should be moulded after that of some of those set before him in this volume. It was written for the youth of another country, but its wealth of instruction has been recognized by its translation into more than one European language, and it is not too much to predict for it a popularity among American boys.” -N.Y. World

Who better to take inspirational advice from than a man named Smiles? But unlike the feel-good cheerleading that the term "self-help" says to us today, to Smiles it might well have been synonymous with "hard work." For this 1859 volume is dedicated to "stimulat[ing] youths to apply themselves diligently to right pursuits,--sparing neither labour, pains, nor self-denial in prosecuting them--and to rely upon their own efforts in life." Though the author himself admits his lessons are "old-fashioned but wholesome," he nevertheless delivers stern but well-intentioned lectures on such commonsense concepts as the importance of learning from failure, how work is the best teacher, and the value of thrift, gentility, and honesty, all peppered with examples of such noble industry from the lives of writers, scientists, artists, inventors, educators, philanthropists, missionaries, and--gulp!--martyrs. It's as if all paternal wisdom had been reduced to a single book.

“Riches and rank have no necessary connection with genuine gentlemanly qualities. The poor man with rich spirit is in all ways superior to the rich man with a poor spirit. To borrow St. Paul's words, the former is as "having nothing, yet possessing all things," while the other, though possessing all things has nothing. Only the poor in spirit are really poor. He who has lost all, but retains his courage, cheerfulness, hope, virtue, and self respect, is still rich.” ― Samuel Smiles, Self-Help

“Many are the lives of men unwritten, which have nevertheless as powerfully influenced civilization and progress as the more fortunate Great whose names are recorded in biography. Even the humblest person, who sets before his fellows an example of industry, sobriety, and upright honesty of purpose in life, has a present as well as a future influence upon the well-being of his country; for his life and character pass unconsciously into the lives of others, and propagate good example for all time to come.” ― Samuel Smiles, Self-Help

Review: Much in Self-Help is still stimulating. Its central precept - the value of hard work, ingenuity, perseverance, thrift, a solid education - is in tune with American notions of workfare, not to mention the Labour party's espousal ... of a shift in the mission statement of the British social security system from 'hand-out' to 'hand-up'. Welfare financed by taxation is no longer chic. -- The Financial Times, 29.06.96

So far from a shallow exposition of 'economic man', Self-Help is an uplifting study of individual morality brought to life by personal examples. -- Lord Harris, The Times, 29.06.96

1. Self Help; with Illustrations of Conduct and Perseverance

Book Description CreateSpace Independent Publishing Platform. Paperback. Condition: Very Good. A copy that has been read, but remains in excellent condition. Pages are intact and are not marred by notes or highlighting, but may contain a neat previous owner name. The spine remains undamaged. At ThriftBooks, our motto is: Read More, Spend Less. Seller Inventory # G1475223730I4N00

2. Self help; with illustrations of conduct and perseverance

3. Self help; with illustrations of conduct and perseverance

Book Description CreateSpace Independent Publishing Platform, 2012. Paperback. Condition: Very Good. Self help; with illustrations of conduct and perseverance This book is in very good condition and will be shipped within 24 hours of ordering. The cover may have some limited signs of wear but the pages are clean, intact and the spine remains undamaged. This book has clearly been well maintained and looked after thus far. Money back guarantee if you are not satisfied. See all our books here, order more than 1 book and get discounted shipping. . Seller Inventory # 7719-9781475223736