Skip to main content
Home Grace Hopper, [women computers] Amazing Grace Hopper's Manual for the Mark I, Containing Some Of... 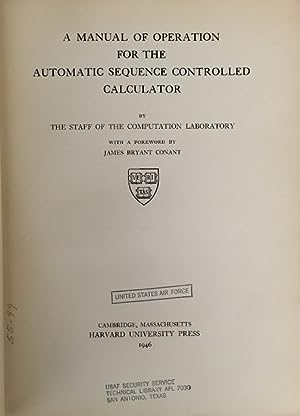 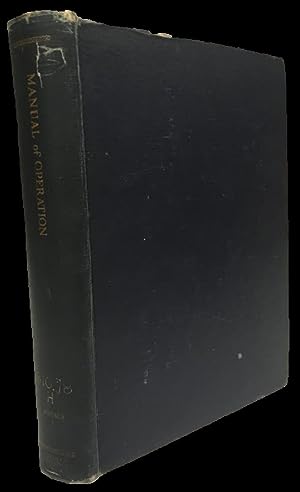 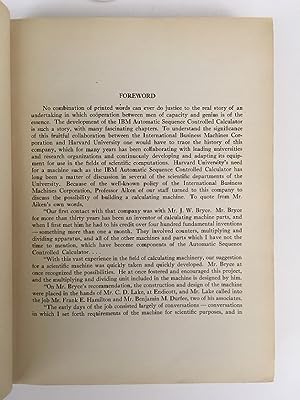 "Amazing" Grace Hopper's Manual for the Mark I, Containing Some Of The First Computer Code

We're sorry; this book is no longer available. AbeBooks has millions of books. Please enter search terms below to find similar copies.

Grace Hopper. A Manual of Operation for the Automatic Sequence Controlled Calculator. Cambridge, 1946. First Edition. Thick Quarto. Condition: Very Good. Publisher's blue cloth binding. Minor signs of use on spine and covers. This copy belonged to the United States Air Force. Library number on spine, with two stamps of the United States Air Force on the lower half of the title page. Illustrated with black and white plates and numerous diagrams. Binding good and tight. Pages clean. A rare first edition documenting the innovative work of Grace Hopper, who made modern day computing technology possible. The instruction sequences throughout this volume are among the earliest examples anywhere of digital computer programs. This manual for the automatic sequence controlled calculator, also known as the Mark I or the Hopper Calculator, contains some of the first examples of computer code, as well as clear descriptions of the machine, its construction, and use. It was written largely by Hopper, a female programmer who made significant contributions in the field. Hopper was the chief author of chapters 1-3 and the eight appendices following chapter 6. According to computer historian Paul Ceruzzi, the Manual was " a milepost . the first extended analysis of what is now known as computer programming since Charles Babbage's and Lady Lovelace's writings a century earlier." The Harvard Mark I was used on the Manhattan Project. Grace M. Hopper would go on to become one of the most famous of the postwar computer pioneers, making fundamental contributions to the development of the first compilers. She graduated from Vassar in 1928 with a bachelor's degree in mathematics and physics and earned her master's degree at Yale University in 1930. Hopper became an advocate for making coding and software design education available to girls. As a leader in the Office of Naval Research and a scientist at the Harvard Computational Lab, Hopper was a key figure in the development of early computers and software including the Mark I, the UNIVAC, and the Whirlwind I. Her work developing an English computer language COBOL simplified humans' ability to enter complex commands into computers and remains the most ubiquitous business language to date. A very good copy of this rare book testifying to women's influence in the earliest computation developments. Engel, "Admiral "Amazing Grace" Hopper, pioneering computer programmer" (2013). Williams, Improbable Warriors: Women Scientists and the U.S. Navy in World War II (2001). Seller Inventory # 16165

AbeBooks offers millions of new, used, rare and out-of-print books, as well as cheap textbooks from thousands of booksellers around the world. Shopping on AbeBooks is easy, safe and 100% secure - search for your book, purchase a copy via our secure checkout and the bookseller ships it straight to you.

New and used copies of new releases, best sellers and award winners. Save money with our huge selection.

Rare & Out of Print Books

Catch a break with big discounts and fantastic deals on new and used textbooks.