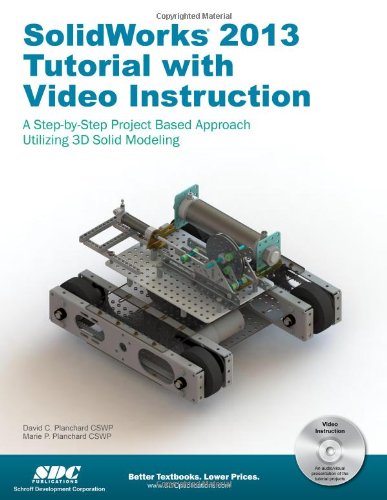 Synopsis: four year university or industry professional that is a beginner or intermediate CAD user. The text provides a student who is looking for a step-by-step project based approach to learning SolidWorks with an enclosed 1.5 hour video instruction DVD, SolidWorks model files, and preparation for the CSWA exam.

Chapters 8 - 11 prepare you for the new Certified SolidWorks Associate Exam (CSWA). The CSWA certification indicates a foundation in and apprentice knowledge of 3D CAD and engineering practices and principles.

Follow the step-by-step instructions and develop multiple assemblies that combine over 100 extruded machined parts and components. Formulate the skills to create, modify and edit sketches and solid features.

Learn the techniques to reuse features, parts and assemblies through symmetry, patterns, copied components, design tables and configurations. Learn by doing, not just by reading!

Desired outcomes and usage competencies are listed for each chapter. Know your objective up front. Follow the steps in each chapter to achieve your design goals. Work between multiple documents, features, commands, custom properties and document properties that represent how engineers and designers utilize SolidWorks in industry.

About the Author: David Planchard is the founder of D&M Education LLC. Before starting D&M Education, he spent over 27 years in industry and academia holding various engineering, marketing, and teaching positions and degrees. He holds five U.S. patents and one international patent. He has published and authored numerous papers on Machine Design, Product Design, Mechanics of Materials, and Solid Modeling. He is an active member of the SolidWorks Users Group and the American Society of Engineering Education (ASEE). David holds a BSME, MSM with the following Professional Certifications: CCAI, CCNA, CCNP, CSWA, CSWP, CSDA, CSWSA-FEA. David is a SolidWorks Solution Partner, an Adjunct Faculty member and the SAE advisor at Worcester Polytechnic Institute in the Mechanical Engineering department.

Marie Planchard is the Director of World Education Markets at DS SolidWorks Corp. Before she joined SolidWorks, Marie spent over 10 years as an engineering professor at Mass Bay College in Wellesley Hills, MA. She has 14 plus years of industry software experience and held a variety of management and engineering positions. Marie holds a BSME, MSME and CSWP, CSDA, CSWSA-FEA. She is an active member of the American Society of Mechanical Engineers (ASME) and the American Society for Engineering Education (ASEE).

David and Marie Planchard are co-authors of the following books:

Book Description SDC Publications. Perfect Paperback. Condition: GOOD. Spine creases, wear to binding and pages from reading. May contain limited notes, underlining or highlighting that does affect the text. Possible ex library copy, thatâ ll have the markings and stickers associated from the library. Accessories such as CD, codes, toys, may not be included. Seller Inventory # 3167124480

Book Description SDC Publications. Perfect Paperback. Condition: As New. An apparently unread copy in perfect condition. Dust cover is intact; pages are clean and are not marred by notes or folds of any kind. At ThriftBooks, our motto is: Read More, Spend Less. Seller Inventory # G1585037796I2N00

Book Description SDC Publications, 2013. Perfect Paperback. Condition: Good. Pap/Cdr. Ships in a BOX from Central Missouri! May not include working access code. Will not include dust jacket. Has used sticker(s) and some writing and/or highlighting. Ships same or next business day.ï¿½ UPS shipping for most packages, (Priority Mail for AK/HI/APO/PO Boxes). Seller Inventory # 001364784U

Book Description SDC Publications, 2013. Condition: Good. A+ Customer service! Satisfaction Guaranteed! Book is in Used-Good condition. Pages and cover are clean and intact. Used items may not include supplementary materials such as CDs or access codes. May show signs of minor shelf wear and contain limited notes and highlighting. Seller Inventory # 1585037796-2-4

Book Description SDC Publications, 2013. Perfect Paperback. Condition: Good. Pap/Cdr. Ships in a BOX from Central Missouri! May not include working access code. Will not include dust jacket. Has used sticker(s) and some writing or highlighting. Ships same or next business day. UPS shipping for most packages, (Priority Mail for AK/HI/APO/PO Boxes). Seller Inventory # 001364784U

Book Description Condition: Good. May contain highlighting, handwriting or underlining through out the book. Book may show some wear. Used books may not contain supplements such as access codes, CDs, etc. Every item ships the same or next business day with tracking number emailed to you. Get Bombed!!. Seller Inventory # 3U1GIF000SS0

Book Description Condition: good. May show signs of wear, highlighting, writing, and previous use. This item may be a former library book with typical markings. No guarantee on products that contain supplements Your satisfaction is 100% guaranteed. Twenty-five year bookseller with shipments to over fifty million happy customers. Seller Inventory # 19534674-5

There are 3 more copies of this book