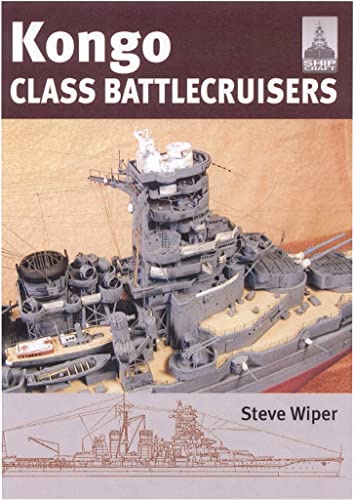 This is the ninth volume in a series providing ship modellers with all they need to know about a famous class of warship and associated model kits.
The subject of this volume is the Imperial Japanese Navy Kongo class capital ships. The lead ship of the class, Kongo, was originally built in great Britain for Japan as a battlecruiser. Her three sisterships were all later built in Japan, also as battlecruisers. After several major reconstructions, they were brought up to modern standards and reclassified as battleships. During the Second World War, these ships found a perfect role as escorts for fast carrier task forces. Less successfully, they were also used in support of lighter forces in confined waters where two of them were lost. The surviving pair saw much service before they too were sunk in the final stages of the war.
With its unparalled level of visual information-paint schemes, models, line drawings and photographs- it is simply the best reference for any modelmaker setting out to build one of these famous warships.64 pages p/b

Book Description Seaforth Publishing, 2008. Paper Back. Condition: Very Good. Exceptionally clean and bright, looking unread and very close to new condition. The subject of this volume is the Japanese Kongo class, four ships built during the First World War as battlecruisers, but extensively modified and reconstructed between the wars as fast battleships, so that each ship presented a different appearance. They were the chosen escorts for the elite IJN carrier forces, and saw much action during the Pacific War. Seller Inventory # 7015796

Book Description Pen & Sword Books Limited. Paperback. Condition: Good. A copy that has been read, but remains in clean condition. All pages are intact, and the cover is intact. The spine may show signs of wear. Pages can include limited notes and highlighting, and the copy can include previous owner inscriptions. At ThriftBooks, our motto is: Read More, Spend Less. Seller Inventory # G1848320043I3N00

Book Description Seaforth Publishing, 2008. Condition: Good. A+ Customer service! Satisfaction Guaranteed! Book is in Used-Good condition. Pages and cover are clean and intact. Used items may not include supplementary materials such as CDs or access codes. May show signs of minor shelf wear and contain limited notes and highlighting. Seller Inventory # 1848320043-2-4

There are 7 more copies of this book