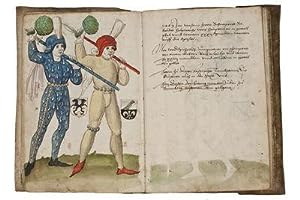 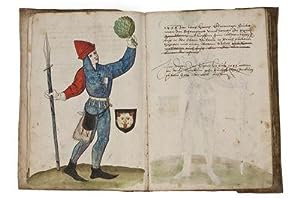 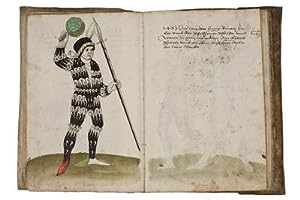 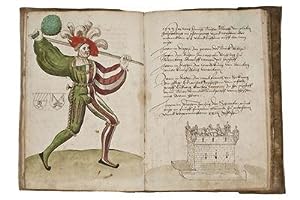 SCHEMBART CARNIVAL BOOK; illuminated Renaissance manuscript on paper with 64 drawings in pen and ink with watercolor and 22 additional pen and ink drawings

We're sorry; this book is no longer available. AbeBooks has millions of books. Please enter search terms below to find similar copies.

A COMPLETE AND CUSTOMIZED RECORD OF THE FAMOUS NUREMBERG CARNIVAL PARADE, WITH MARVELOUS AND ECCENTRIC ILLUSTRATIONS. Illuminated manuscript on paper in German, Germany, likely Nuremberg, c. 1550-1600. 310 x 205 mm. 88 leaves, some watermarks in Piccard, complete, no ruling, written in various German cursive hands in one column of varying lengths, SIXTY-FOUR FULL-PAGE DRAWINGS in very fine condition, colored with washes, some details in gold and silver leaf, TWENTY-TWO SMALLER PEN DRAWINGS, probably added only slightly later. BINDING: Contemporary limp vellum with flap, loose in binding, lacking fore-edge ties, inscribed on spine, "Schempart Buech." ILLUSTRATION: A series of sixty-four stunning colored illustrations, somet with gold and silver, is at the center of this precious manuscript. As is customary in Schembart books, these illustrate a sequence of masked runners representing the Hauptmann , or captain of each year's carnival parade, wearing a mask and a highly decorative costume and usually identified by a coat of arms. The details of these costume are consistent from one manuscript to the next, but vary considerably in how they are represented. The twenty-two additional drawings were added a bit later by a separate artist, whose work shows the influence of Albrecht Dürer. They depict the carnival floats (known as Hölle , or Hells) and were drawn at a much higher level of execution than is common in other manuscripts. TEXT: This manuscript is one of the earliest preserved chronicles of the famous Schembartlauf , a carnival parade that was held on Shrove Tuesday in the German city of Nuremberg from 1449 to 1539. Short text entries accompanying each full-page drawing relate the details of who participated in the carnival each year it took place, what they wore, and sometimes what route they took or, in the years the carnival did not take place, relating the reasons why, whether unrest or plague. The final eighteen leaves were added shortly afterwards and they offer another textual chronicle of the carnival, as well as an account of how the Schembartlauf was first instated in Nuremberg: the parade originated as a privilege granted by Holy Roman Emperor Charles IV to the butchers' guild of Nuremberg, who had not joined the other city guilds in overthrowing the patrician town council. Members of the guild could wear masks (a rough translation of Schembart , which literally means "hiding beard"), dance, perform fencing matches, and parade, accompanied by runners who protected the dancers while wearing masks and extravagant costumes of their own and brandishing lances and boughs of leaves that concealed fireworks. The many corrections to the text here reflects early owners' keen interest in possessing a reliable historical record of the Schembart carnival. PROVENANCE: This copy was customized for its first owners, the members of the influential patrician family of Kress von Kressenstain in Nuremberg, who featured prominently in the carnival; engraved armorial ex libris of Iohannes Guilhelmus Kress à Kressenstain dated 1619 on the first front flyleaf. Engraved armorial ex libris of the Prince Liechtenstein glued to front pastedown; purchased from that library by H. P. Kraus in 1949. Belonged to Paul and Marianne Gourary (Paul, d. 2007); their bookplate underneath the Kressenstain label. Included in Christie's New York 6 June 2009 sale, Splendid Ceremonies: The Paul and Marianne Gourary Collection of Illustrated Fête Books (lot 309). CONDITION: Paper thin and thumbed toward margins, minor stains and spots throughout, some offsets of the washes of the drawings, very few minor tears, binding splits at head and foot of flap fold, but otherwise in very fine condition. Full description and photographs available. Bookseller Inventory # 76083

AbeBooks offers millions of new, used, rare and out-of-print books, as well as cheap textbooks from thousands of booksellers around the world. Shopping on AbeBooks is easy, safe and 100% secure - search for your book, purchase a copy via our secure checkout and the bookseller ships it straight to you.

New and used copies of new releases, best sellers and award winners. Save money with our huge selection.

Rare & Out of Print Books

Catch a break with big discounts and fantastic deals on new and used textbooks.