Items related to Rules for the Dance: A Handbook for Writing and Reading...

Home Oliver, Mary Rules for the Dance: A Handbook for Writing and Reading Metrical...
Stock Image 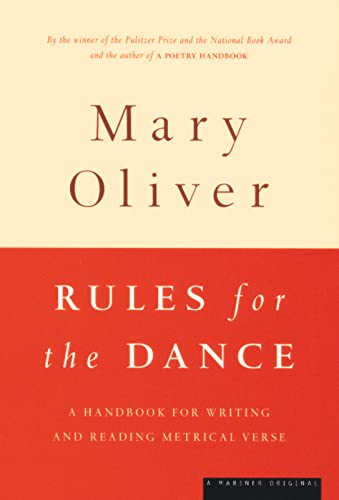 Rules for the Dance: A Handbook for Writing and Reading Metrical Verse

Title: Rules for the Dance: A Handbook for Writing ...

"True ease in writing comes from art, not chance, / As those move easiest who have learn'd to dance," wrote Alexander Pope. "The dance," in the case of Oliver's brief and luminous book, refers to the interwoven pleasures of sound and sense to be found in some of the most celebrated and beautiful poems in the English language, from Shakespeare to Edna St. Vincent Millay to Robert Frost. With a poet's ear and a poet's grace of expression, Oliver shows what makes a metrical poem work - and enables readers, as only she can, to "enter the thudding deeps and the rippling shallows of sound-pleasure and rhythm-pleasure that intensify both the poem's narrative and its ideas."

Just as dancing is "the art of moving in accord with a pattern," says Mary Oliver, so is writing metrical verse. "One sorts out the pattern, one relies on it, and relaxes from effort to pleasure." The rules (concerning rhyme, line length, and pattern) are made if not to be deliberately flouted, then at least to be toyed with. Oliver claims to have written this book for both writers and readers of metrical verse, but it is an odd sort of fit for either. A writer might wish for a little more detail; a reader might find too much. The book works best as a kind of refresher course, for those who have forgotten the difference between metaphysical and Petrarchan conceits, between masculine and feminine rhymes, and would like to brush up a bit. Oliver does a wonderful job of explaining why the most common forms of metrical verse came to prevail (for instance, the five-foot line is "the line which is the closest to the breathing capacity of our lungs"), and of nudging us into reading more metrical poetry (nearly half this volume is devoted to works by John Donne, William Blake, Emily Dickinson, Elizabeth Bishop, and others). Blessedly, Oliver reminds us that, though one could get carried away trying new meters and forms, one shouldn't expect to be writing a lot of double ionics anytime soon. "Expect to use one hypersyllabic foot in ten years, perhaps," she says. "Anacrusis, rarely. Catalexis: often. The double ionic: when the next comet flies over." --Jane Steinberg


We guarantee the condition of every book as it's described on the Abebooks web
sites. If you're dissatisfied with your purchase (Incorrect Book/Not as
Described/Damaged) or if the order hasn't arrived, you're eligible for a refund
within 30 days of the estimated delivery date. If you've changed your mind about a
book that you've ordered, please use the Ask bookseller a question link to contact
us and we'll respond within 2 business days.

name of your business and form of legal entity :Ebooksweb ...