Items related to A King's Story: The Memoirs of H.R.H. the Duke... 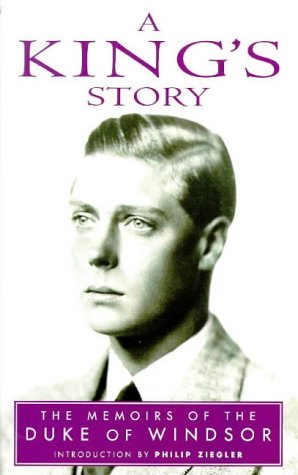 A King's Story: The Memoirs of H.R.H. the Duke of Windsor K.G. (Lost Treasures Series)

Written in 1951, this is the autobiography of the late Duke of Windsor - great grandson of Queen Victoria, grandson of Edward VII, son of George V, and cousin of the German Emperor and the Czar of Russia. The book tells the story of the future king's early youth at Sandringham, his years at Naval School on the Isle of Wight, at Magdalen College, Oxford, in the army in World War I, and his tours of Canada, India, Australia, and New Zealand. Eventually he becomes king, on the death of his father. He defies the wishes of Stanley Baldwin, the Prime Minister, when he insists on marrying Wallis Simpson, the future Duchess of Windsor. The book features his abdication, and his marriage.


Orders usually ship within 2 business days. Shipping costs are based on books weighing 2.2 LB, or 1 KG. If your book order is heavy or over sized, we may contact you to let you know extra shipping is required.