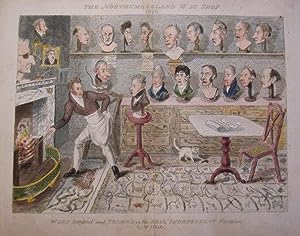 An album containing 36 engraved and etched caricatures, including at least 25 dealing with the Alnwick (Northumberland) election of 1826, some additional dealing with the Northumberland election of 1832, and 3 broadsides (2 illustrated). various sized sheets, 25 hand-coloured, most mounted on larger uniform sheets. bound as an oblong folio in later half morocco (extremities worn, short splits in lower joints, scattered soiling & foxing, several sheets folded & some torn but with no loss of image). ownership entry of William Graham Richardson, North Shields. The 1826 Alnwick election for two parliamentary representatives for Northumberland was a hotly contested one, marked by much rancour and animosity among the candidates and the voters. Some voters engaged in the practice of plumping, or voting for only a single candidate rather than two. Of the four contestants, Henry Thomas Liddell (Liddle) (Tory), Matthew Bell (Tory), Thomas Wentworth Beaumont (at the time an Independent Reformer), and Henry George Grey, Viscount Howick (Whig), Liddell and Bell emerged victorious. Another figure appearing in some of the caricatures is John George Lambton, later first Earl of Durham, Governor General of Canada (1837) and author of the celebrated Durham Report (1839). While supporting the candidature of his brother-in-law, Lord Howick, Lambton fought a bloodless duel with T.W.Beaumont. A full listing of the broadsides and caricatures, some of which carry the imprint of W.Stephenson or W.Davison, is available upon request. Seller Inventory # elala2053


All prices are net in US dollars.
Shipping, handling, & insurance charges are extra.
Canadian residents are subject to applicable taxes.
All items are guaranteed to be authentic and as described.
All items are in very good or better condition unless
otherwise stated; major defects are noted.
Images available upon request.
All items are offered subject to prior sale.
All items are returnable within 30 days with prior notification if found to be not as described.
Libraries may request that orders ...


All orders are carefully and solidly packaged and are shipped in a timely manner. Shipping costs are based on books weighing 2.2 LB, or 1 KG. If your book order is heavy or oversized, we may contact you to let you know extra shipping is required. We ship once a week with USPS, if you need an item fast, we may have use Canadapost or a courier if you just missed our ship date for USPS parcels.