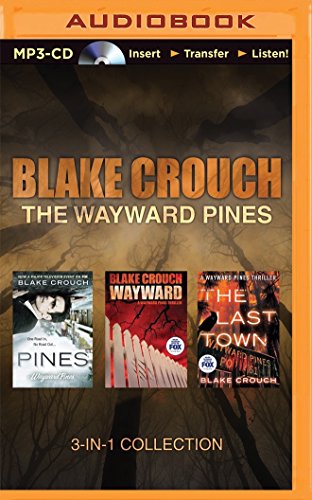 The entire Wayward Pines Trilogy in one collection.

Secret service agent Ethan Burke arrives in Wayward Pines, Idaho, with a clear mission: locate and recover two federal agents who went missing in the bucolic town one month earlier. But within minutes of his arrival, Ethan is involved in a violent accident. He comes to in a hospital, with no ID, no cell phone, and no briefcase. The medical staff seems friendly enough, but something feels...off. As the days pass, Ethan’s investigation into the disappearance of his colleagues turns up more questions than answers. Why can’t he get any phone calls through to his wife and son in the outside world? Why doesn’t anyone believe he is who he says he is? And what is the purpose of the electrified fences surrounding the town? Are they meant to keep the residents in? Or something else out? Each step closer to the truth takes Ethan further from the world he thought he knew, from the man he thought he was, until he must face a horrifying fact—he may never get out of Wayward Pines alive.

Welcome to Wayward Pines, population 461. Nestled amid picture-perfect mountains, the idyllic town is a modern-day Eden...except for the electrified fence and razor wire, snipers scoping everything 24/7, and the relentless surveillance tracking each word and gesture.

None of the residents know how they got here. They are told where to work, how to live, and who to marry. Some believe they are dead. Others think they’re trapped in an unfathomable experiment. Everyone secretly dreams of leaving, but those who dare face a terrifying surprise.

Ethan Burke has seen the world beyond. He’s sheriff, and one of the few who knows the truth—Wayward Pines isn’t just a town. And what lies on the other side of the fence is a nightmare beyond anyone’s imagining.

The Last Town
The third book in the Wayward Pines Series—now a Major Television Event from executive producer M. Night Shyamalan, starring Matt Dillon and premiering May 14th on FOX.

Secret Service agent Ethan Burke arrived in Wayward Pines, Idaho, three weeks ago. In this town, people are told who to marry, where to live, where to work. Their children are taught that David Pilcher, the town’s creator, is god. No one is allowed to leave; even asking questions can get you killed.

But Ethan has discovered the astonishing secret of what lies beyond the electrified fence that surrounds Wayward Pines and protects it from the terrifying world beyond. It is a secret that has the entire population completely under the control of a madman and his army of followers, a secret that is about to come storming through the fence to wipe out this last, fragile remnant of humanity.

Blake Crouch’s electrifying conclusion to the Wayward Pines Series—now a Major Television Event Series debuting Summer 2014 on FOX—will have you glued to the page right down to the very last word.

Blake Crouch was born in the North Carolina piedmont in 1978. He earned his undergraduate degrees in English and creative writing from the University of North Carolina-Chapel Hill, publishing his first two novels within five years of graduation. Since then he has published eight additional novels as well as multiple novellas, short stories, and articles. His novels Fully Loaded, Run, and Stirred, which was co-written with J. A. Konrath, have each earned spots in the top ten of the Kindle bestseller list. Three novels, one novella, and one short story have all been optioned for film. He lives today in Durango, Colorado.

Book Description MP3 CD. Condition: New. MP3 CD. Shipping may be from our Sydney, NSW warehouse or from our UK or US warehouse, depending on stock availability. 0.240. Seller Inventory # 9781501274138