Items related to Amish Roots: A Treasury of History, Wisdom, and Lore 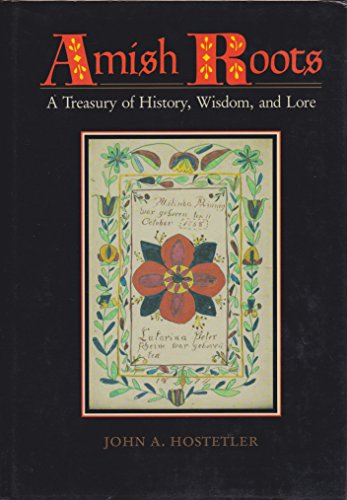 Amish Roots: A Treasury of History, Wisdom, and Lore

This is a New and Unread copy of the first edition (1st printing). NOT a remainder copy. Bookseller Inventory # 024894

It isn't the way of the Amish to write about themselves. But John A. Hostetler, author of the best- selling Amish Society, has put together a delightful anthology in which they do just that. More than 150 rare and unusual letters and journal entries, poems and stories, riddles, legends, and bits of family lore offer a uniquely authentic view of Amish life from colonial times to the present. Illustrated with 25 pages of full-color illustrations, this is the Amish story as told by the Amish themselves, by their friends and neighbors, and by others who understand Amish ways.

Hans Nussbaum, a nineteenth-century Swiss immigrant, writes to friends of a rough Atlantic crossing and a hard life in the Ohio Valley, suggesting that his "sleepy and lazy" cousins stay home in Europe. Virgil Detweiler tells of an ancestor's arrival at the port of colonial Philadelphia with personal baggage that included 5 copper stills, 30 stoves, 596 scythes, and 8 flutes. (He lost it all to King George's alert customs men.) In 1863 Amish bishop Daniel Beachy faces down a company of Confederate cavalry who try to steal his horse on a muddy Maryland highway. And an Amish teen- ager writes of life in a Pennsylvania prison after refusing military service during World War II.

But Amish Roots is more than an anthology of Amish history. Here Amish men and women speak out. On America. The decline of the family. Health and home remedies. Farming. They offer three centuries' wisdom on issues ranging from raising a barn to raising children, from getting along with neighbors to breaking in a team of mules. They tell what's wrong with public schools and share strategies for coping with government officials, aggressive reporters, and tourists. Converts to the faith tell their story. Those who leave the faith describe life among the "English."

Throughout, the Amish deal with the modern world in ways that often temper outright rejection with quiet compromise. In 1850, newly arrived Amish immigrants are astonished at the sight of the Mississippi sidewheeler that will take them from New Orleans to their new home in Illinois. More than a century later, an Amish tourist in Europe offers a first-hand account of crossing the English Channel by Hovercraft.

""Less accessible than perhaps any other American subculture, the Amish reveal themselves only in fleeting glimpses to the 'English,' as they refer to outsiders. That is why former Temple professor John A. Hostetler's new collection is so valuable, for in it the Amish speak for themselves." -- Philadelphia Inquirer

"Amish Roots can be read straight through to help one develop a deeper understanding of the Amish people or it can be savored in bits and pieces, in someone's guest room or by one's bed. In a quiet way it is both a critique of contemporary American culture and a reassuring comment on the goodness of people." -- Natural History

"Describes seemingly every aspect of Amish life in the words of men and women who have lived it... Reproductions of such Amish artworks as drawings and hymnal and Bible bookplates, each one handsome enough to frame." -- Cleveland Plain Dealer

Our inventory consists primarily of history, modern first editions, art, and antique reference books, although more will be added as we work on putting our entire inventory online.


Books may be returned for any reason within twenty days for a complete refund.
Please make checks/money orders payable to Gerald Rosencranz.


We charge $3.75 for bookrate shipping everywhere in the US; $8.10 for priority mail. We increased international postage to cover our costs for flat-rate boxes. It's possible we can reduce charges for specific books.