Items related to Nonlinear Science: The Challenge of Complex Systems... 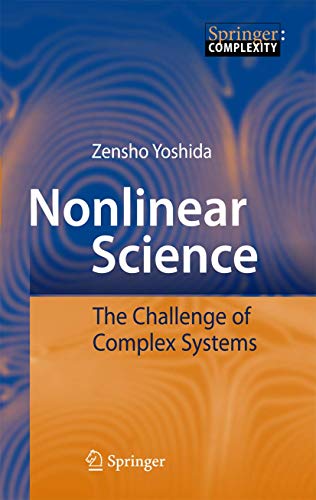 “The usefulness of the book is as a good auxiliary textbook for such courses as Mathematical Modeling, Dynamical Systems, Equations of Mathematical Physics.” (Vladimir Răsvan, Zentralblatt MATH, Vol. 1195, 2010) From the Back Cover:

This book gives a general, basic understanding of the mathematical structure "nonlinearity" that lies in the depths of complex systems. Analyzing the heterogeneity that the prefix "non" represents with respect to notions such as the linear space, integrability and scale hierarchy, "nonlinear science" is explained as a challenge of deconstruction of the modern sciences. This book is not a technical guide to teach mathematical tools of nonlinear analysis, nor a zoology of so-called nonlinear phenomena. By critically analyzing the structure of linear theories, and clarifying their limitation, this book makes the meaning of "nonlinear" (and, at the same time, of "linear") precise and concrete. The core material is accessible to a much broader audience beyond specialists. It also includes notes that describe more advanced materials for extended studies which might be rather non-trivial for specialists in physics and mathematics.

Book Description Springer-Verlag Berlin and Heidelberg GmbH & Co. KG, Germany, 2010. Hardback. Condition: New. 2010 ed. Language: English. Brand new Book. Modern science has abstracted, as compensation for establishing rigorousness, the complexity of the real world, and has inclined toward oversimpli?ed ?ctitious n- ratives; as a result, a disjunction has emerged between the wisdom of science and reality. Re?ecting on this, we see the need for science to recover reality; can it reveal new avenues for thought and investigation of the complexity? The study of science is the pursuit of clarity and distinctness. Physics,after Galilei placed it in the realm of mathematics, has been trying to establish clearness by mathematical logic. While physics and mathematics, respectively, have different intellectual incentives, they have intersected in history on countless occasions and have woven a ?awless system of wisdom. The core of rigorous science is always made of mathematical logic; the laws of science cannot be represented without the language of mathematics. Conversely, it is undoubtedly dif?cult to stimulate ma- ematical intellect without a reference to the interests of science that are directed to the real world. However, various criticisms have been raised against the discourses of sciences that explain the events of the real world as if they are "governed" by mathematical laws. Sciences, being combined with technologies, have permeated, in the form of technical rationalism, the domain of life, politics, and even the psychological world. The criticisms accuse seemingly logical scienti?c narratives of being responsible for widespread destruction and emergence of crises, unprecedented suffering of hum- ity. Seller Inventory # APC9783642034053