Items related to Introduction to Conformal Invariance and Its Applications... 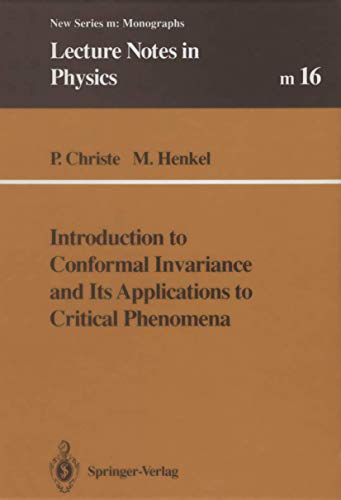 The history of critical phenomena goes back to the year 1869 when Andrews discovered the critical point of carbon dioxide, located at about 31°C and 73 atmospheres pressure. In the neighborhood ofthis point the carbon dioxide was observed to become opalescent, that is, light is strongly scattered. This is nowadays interpreted as comingfrom the strong fluctuations of the system close to the critical point. Subsequently, a wide varietyofphysicalsystems were realized to display critical points as well. Ofparticular importance was the observation of a critical point in ferromagnetic iron by Curie. Further examples include multicomponent fluids and alloys, superfluids, superconductors, polymers and may even extend to the quark-gluon plasmaand the early universe as a whole. Early theoretical investigationstried to reduce the problem to a very small number of degrees of freedom, such as the van der Waals equation and mean field approximations and culminating in Landau's general theory of critical phenomena. In a dramatic development, Onsager's exact solutionofthe two-dimensional Ising model made clear the important role of the critical fluctuations. Their role was taken into account in the subsequent developments leading to the scaling theories of critical phenomena and the renormalization group. These developements have achieved a precise description of the close neighborhood of the critical point and results are often in good agreement with experiments. In contrast to the general understanding a century ago, the presence of fluctuations on all length scales at a critical point is today emphasized.

This book grew from a series of lectures given to graduate students of condenses matter physics. This introduction to conformal invariance and to two-dimensional critical phenomena reflects their theoretical background. The algebraic foundation of critical theories in two dimensions is introduced and explained as is the role of modular invariance for the partition function. A large part of the book is devoted to numerical methods and their application in various models. Finite-size scaling techniques and their conformal extensions are treated in detail. Transfer matrix diagonalization methods are used to study, among others, the Ising and Potts models, including tricritical behaviour, the Ashkin-Teller model systems with continuous symmetries such as the XY model and the XXZ quantum chain as well as the Yang-Lee edge singularity. Numerical methods also make it possible to describe the vicinity of the critical point. The exact S-matrix approach, truncation method, the thermodynamic Bethe ansatz and the asymptotic finite-size scaling function technique are illustrated on simple models. The integrability of the two-dimensional Ising model in a magnetic field is dealt with.

Finally, the extension of conformal invariance appropriate to the study of surface critical phenomena and defect line problems is described, and the book closes with an outlook towards possible applications in critical dynamics.

1. Introduction to Conformal Invariance and Its Applications to Critical Phenomena. Lecture Notes in Physics Monographs m16

2. Introduction to Conformal Invariance and Its Applications to Critical Phenomena (Lecture Notes in Physics Monographs)

3. Introduction to Conformal Invariance and Its Applications to Critical Phenomena (Lecture Notes in Physics Monographs).