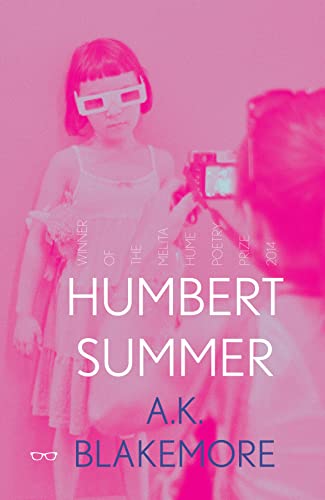 Humbert Summer is a book about the febrile matter of fantasy in its rawest form alternately subversive, awkward, romantic and unsettling. Written between the ages of sixteen and twenty-three, the poems in A. K. Blakemore s debut full-length collection navigate the challenging space between adolescence and (abortive) adulthood in a culture quick to dismiss, commodify or fetishise the female body and imagination.

A. K. Blakemore was born in south London in 1991. she was named a Foyle Young Poet of the year in 2007 and 2008, and has performed at the secret Garden Party and Latitude festivals. Her work has been published in a number of journals, zines and anthologies, with her first pamphlet released as part of the Nasty Little Press Nasty Little Intros series in 2013. She currently lives in east London. A graduate of Oxford University, she currently works as a fashion model, and recently was mentioned in Vogue.

Book Description Paperback. Condition: Very Good. Shipped within 24 hours from our UK warehouse. Clean, undamaged book with no damage to pages and minimal wear to the cover. Spine still tight, in very good condition. Remember if you are not happy, you are covered by our 100% money back guarantee. Seller Inventory # 6545-9781908998415

Book Description Paperback. Condition: Very Good. Humbert Summer This book is in very good condition and will be shipped within 24 hours of ordering. The cover may have some limited signs of wear but the pages are clean, intact and the spine remains undamaged. This book has clearly been well maintained and looked after thus far. Money back guarantee if you are not satisfied. See all our books here, order more than 1 book and get discounted shipping. . Seller Inventory # 7719-9781908998415

Book Description Paperback. Condition: Used; Good. **SHIPPED FROM UK** We believe you will be completely satisfied with our quick and reliable service. All orders are dispatched as swiftly as possible! Buy with confidence!. Seller Inventory # 3688905

Book Description Paperback. Condition: Very Good. The book has been read, but is in excellent condition. Pages are intact and not marred by notes or highlighting. The spine remains undamaged. Seller Inventory # GOR006899676