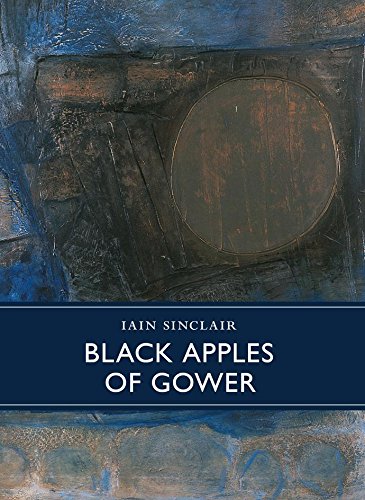 IAIN SINCLAIR walks back along the blue-grey roads and the cliff-top paths of his childhood in south Wales, rediscovering the Gower Peninsula, a place first explored in his youth. Provoked by the strange, enigmatic series of paintings, Afal du Brogwyr (Black Apple of Gower), made by the artist Ceri Richards in the 1950s, Sinclair leaves behind the familiar, 'murky elsewheres' of his life in Hackney, carrying an envelope of black-and-white photographs and old postcards, along with fragments of memory that neither confirm nor deny whether he belongs here, amongst the wave-cut limestone, the car parks and the Gower bungalows.But digging and sifting, he soon recognises that a series of walks over the same ground - Port Eynon Point to Worm's Head - have become significant waymarks in his life, and his recollections of a meeting with the poet of place, Vernon Watkins, is an opening into the legends of the rocks and the mythology behind the Black Apples of Ceri Richards and the poems of Dylan Thomas.Under cliff, along limestone shores, Sinclair comes to realise that the defining quest must be to the Paviland Cave, where in 1823 the Reverend William Buckland found human bones put to ground 36,000 years ago. All the threads of this story lead underground, through this potent and still mysterious cavern, to the site of the first recorded ritual burial in these islands.

"Luxuriant prose, has a dark ascorbic bite, lingering on the tongue just as surely as it does in the mind." Jon Gower, Caught by the River. "Black Apples of Gower fuses anecdote, memoir, biography, history, archaeology and geography in an essay on mortality and memory that sweeps like Rhossili Bay. But is is also a visit to this island of otherness, whose scents, sounds, flora and fauna accompany every step of the way, and there is not a page in which Mr Sinclair's prose is any less musical, rich or sharp than his ghost-guides finest poetry." Mark Griffiths, Country Life.

Iain Sinclair is the author of many acclaimed books, including Downriver (winner of the James Tait Black Memorial Prize). He is also the editor of the anthology of London: City of Disappearances.