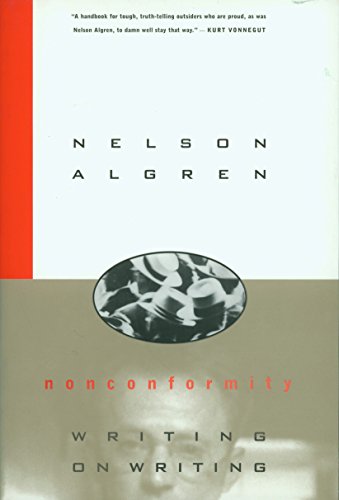 The struggle to write with deep emotion is the subject of this extraordinary book, the previously unpublished credo of one of America's greatest 20th-century writers.
"You don't write a novel out of sheer pity any more than you blow a safe out of a vague longing to be rich," writes Nelson Algren in his only longer work of nonfiction, adding: "A certain ruthlessness and a sense of alienation from society is as essential to creative writing as it is to armed robbery."
Nonconformity is about 20th-century America: "Never on the earth of man has he lived so tidily as here amidst such psychological disorder." And it is about the trouble writers ask for when they try to describe America: "Our myths are so many, our vision so dim, our self-deception so deep and our smugness so gross that scarcely any way now remains of reporting the American Century except from behind the billboards . . . [where there] are still . . . defeats in which everything is lost [and] victories that fall close enough to the heart to afford living hope."
In Nonconformity, Algren identifies the essential nature of the writer's relation to society, drawing examples from Dostoyevsky, Chekhov, Twain, and Fitzgerald, as well as utility infielder Leo Durocher and legendary barkeep Martin Dooley. He shares his deepest beliefs about the state of literature and its role in society, along the way painting a chilling portrait of the early 1950s, Joe McCarthy's heyday, when many American writers were blacklisted and ruined for saying similar things to what Algren is saying here.

"In a characteristically antagonistic and, dare I say it, nihilistic crusade against the role of the writer in society, Algren reminds us why writing should above all be a veritable act of nonconformity against the domineering bastions of a socio-political regularity that attempts to extend their instruments of influence into the diegetic narratologies of the literary project." --Sam Stolton's Top Reads of 2015 in 3:AM Magazine

One of the most neglected of modern American authors and also one of the best loved, NELSON ALGREN (1909-1981) believed that "literature is made upon any occasion that a challenge is put to the legal apparatus by conscience in touch with humanity." His own voluminous body of work stands up to that belief. Algren's powerful voice rose from the urban wilderness of postwar Chicago, and it is to that city of hustlers, addicts and scamps that he returned again and again, eventually raising Chicago's "lower depths" up onto a stage for the whole world to behold. Recipient of the first National Book Award for fiction and lauded by Hemingway as "one of the two best authors in America," Algren remains among our most defiant and enduring novelists. His work includes five major novels, two short fiction collections, a book-length poem and several collections of reportage. A source of inspiration to artists as diverse as Kurt Vonnegut and Donald Barthelme, Studs Terkel and Lou Reed, Algren died on May 9, 1981, within days of his appointment as a fellow of the American Academy of Arts and Letters.