Items related to The Hunters 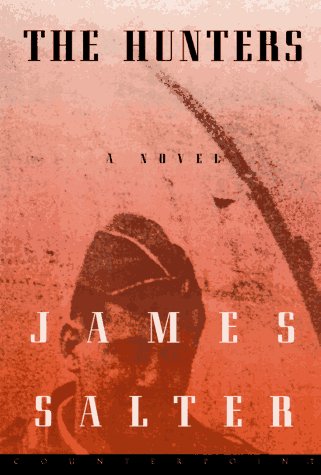 Captain Cleve Connell has one goal when he arrives in Korea to fly the F-86 fighters--to chalk up enough kills to become an ace--but when his missions prove fruitless and he begins to lose faith in himself, Connell must reveal the depth of his courage and honor

"The contemporary writer most admired and envied by other writers. . . . He can . . . break your heart with a sentence."
--Washington Post Book World

"Anyone under forty may not appreciate how profoundly Salter influenced my generation. [He] created the finest work ever to appear in print--ever--about men who fly and fight." --Robert F. Dorr, author of F-86 Sabre Darkly romantic. . .beautifully composed. . .a brilliant war novel." --Chicago Tribune Synopsis:

Counterpoints revised edition of James Salters first novel brings this wartime classic back into print after a forty-one-year absence. Set during the Korean conflict, The Hunters is the story of fighter pilot Cleve Connell, who goes to war determined to chalk up enough enemy kills to make him a flying ace. But Connell endures boredom and a crisis of confidence before the plane he has been seeking finally appears, flown by a legendary North Korean pilot known among the troops as Casey Jones. Captain Cleve Connell has already made a name for himself among pilots when he arrives in Korea to fly the newly operational F-86 fighter jets against the North Koreans. His goal, like that of every fighter pilot, is to chalk up enough kills to become an ace. But things do not turn out as expected. Mission after mission proves fruitless, and Connell finds his ability and his stomach for combat questioned by his fellow airmen: the brash wing commander, Imil; Captain Robey, an ace suspected of breaking the sacred oath between a leader and his wingman; and finally, Lieutenant Pell, a cocky young pilot with an uncanny amount of skill and luck.

Disappointment and fear gradually erode Connells faith in himself, and his dream of becoming an ace seems to slip out of reach. Then suddenly, one dramatic mission above the Yalu River reveals the depth of his courage and honor.Originally published in 1956, The Hunters was James Salters first novel. Based on his own experiences as a fighter pilot in the Korean War, it is a classic of wartime fiction. Now revised by the author and back in print on the fiftieth anniversary of the Air Force, the story of Cleve Connells war flies straight into the heart of mens rivalries and fears.