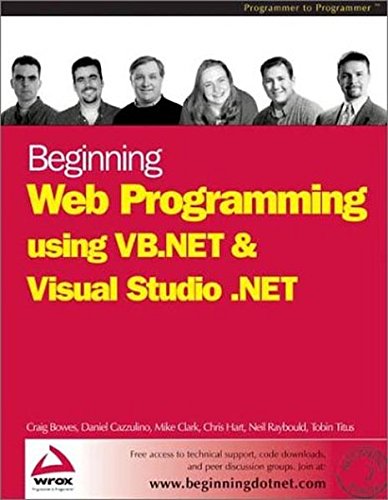 Explores topics including how to create dynamic Web pages with Web forms and Web server controls, how to display data using ADO.NET, the importance of XML, and how to set up an efficient and secure Web server.

This book is aimed at readers with some Visual Basic .NET experience who wish to begin web programming in ASP.NET using the Visual Studio .NET development environment. No previous knowledge of ASP is required.

The introduction of .NET has blurred the lines between previously distinct programming disciplines. With so much functionality encapsulated by the .NET Framework class library, some very diverse tasks have gained a common programming interface that makes moving from one to another seem much less daunting. One area in which this change is particularly striking is web development: where ASP was the realm of script programmers, ASP.NET is implemented by a set of classes that enable you to create Internet applications using the same languages that you'd use for Windows desktop programs. In Visual Studio .NET, Microsoft has taken this idea a stage further: not only does the code look similar, but the GUI looks similar too. Visual Basic .NET's familiar form-based interface is used for the development of web applications as well as for desktop programs. If you want to, you can create a web application without ever seeing a line of HTML code, and you can do so with all the facilities for testing and debugging that Visual Studio .NET provides to programmers of all types. This title takes what you already know about creating desktop applications using Visual Basic .N