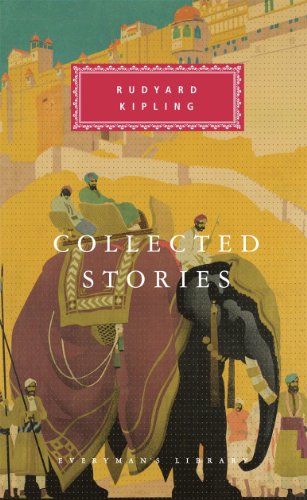 This selection covers the full range of Kipling's extraordinary short stories throughout his career. Ranging in subject matter from the Indain to the Occult, from children to animals, from domestic comedy to public tragedy, each is masterly in its way. Above all, they convey a wonderful sense of life and energy and reveal Kipling as a far greater and more diverse writer than most people suspect. This is an ideal gift-book, perfect for reading in short snatches or long stretches, according to taste.

Rudyard Kipling was born in Bombay, India to British parents on December 30, 1865. In 1871, Rudyard and his sister, Trix, aged three, were left to be cared for by a couple in Southsea, England. Five years passed before he saw his parents again. His sense of desertion and despair were later expressed in his story Baa Baa, Black Sheep (1888), in his novel The Light That Failed (1890), and his autobiography, Something of Myself (1937). As late as 1935 Kipling still spoke bitterly of the "House of Desolation" at Southsea: "I should like to burn it down and plough the place with salt."

At twelve he entered a minor public school, the United Services College at Westward Ho, North Devon. In Stalky and CO. (1899) the myopic Beetle is a self-caricature, and the days at Westward Ho are recalled with mixed feelings. At sixteen, eccentric and literary, Kipling sailed to India to become a journalist. His Indian experiences led to seven volumes of stories, including Soldiers Three (1888) and Wee Willie Winkie (1888). At twenty-four he returned to England and quickly tuned into a literary celebrity. In London he became close friends with an American, (Charles) Wolcott Balestier, with whom he collaborated on what critics called a "dime store novel." Wolcott died suddenly in 1891, and a few weeks later Kipling married Wolcott's sister, Caroline. The newlyweds settled in Brattleboro, Vermont, where Kipling wrote The Jungle Book (1895), and most of Captains Courageous (1897). By this time Kipling's popularity and financial success were enormous. In 1899 the Kiplings settled in Sussex, England, where he wrote some of his best books: Kim (1901), Just So Stories (1902), andPuck of Pooks Hill (1906). In 1907 he received the Nobel Prize for literature. By the time he died, on January 18 1936, critical opinion was deeply divided about his writings, but his books continued to be read by thousands, and such unforgettable poems and stories as "Gunga Din," "If," "The Man Who Would Be King," and "Rikki-Tikki-Tavi" have lived on in the consciousness of succeeding generations. From the Back Cover:

Everything about Kipling is extreme--the abundance of his talent, his precocity, his early fame and success, the variety of literary forms he mastered, the passionate admiration and loathing he evoked in critics and readers, the contradictions within him, the contradictions in the way he has been perceived, both during his life and after his death.

Shipping: FREE
From Ireland to U.S.A.

Book Description Everyman. Condition: New. 1994. Hardcover. This selection covers the full range of Kipling's short stories throughout his career, with the subject matter ranging from the Indian to the occult and from animals to domestic comedy. Num Pages: 911 pages. BIC Classification: FA; FC; FYB. Category: (G) General (US: Trade). Dimension: 213 x 137 x 45. Weight in Grams: 848. . . . . . Books ship from the US and Ireland. Seller Inventory # V9781857151992